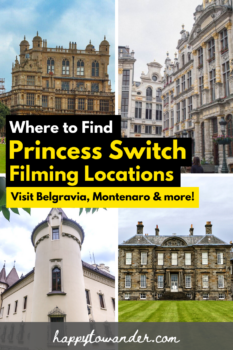 The premise is simple and features High School Musical it-girl Vanessa Hudgens as two doppelgängers who meet in a twist of fate and decide to swap lives for two days, one being a princess-to-be while the other, a humble baker from Chicago…

Of course, both unintentionally fall in love and their lives are steered by a mysterious Santa/god figure who keeps popping up (and is never fully explained).

Save this list of Princess Switch filming locations for later!

It’s unashamedly cheesy, but it’s the stuff of Christmas movie dreams, with royal splendour, romance, winter wonderlands and a glorious fairytale setting to tie it all together. Needless to say, I gobbled it all up.

One of the biggest questions I had after the film was of course, where they filmed it. To my surprise, the entire film was pretty much shot in one of my favourite underrated gems in Europe: Romania!

After discovering that, I knew I needed to dig deeper and write a post about it.

And so, if (like me) you were curious about the fairytale lands depicted in the film, read on.

First off – is Belgravia a Real Place?

Sadly, I need to confirm that Belgravia (much like its fellow movie “ia” countries Aldovia and Genovia) is not an actual country.

That said, before you get swept up in a tidal wave of tears, Belgravia IS a place that exists by name. In fact, it’s a mega-fancy neighbourhood in London that is regularly ranked as one of the wealthiest in the world.

While it’s no fairytale country with its own royal family, it’s a ridiculously pretty neighbourhood with floral facades to die for in the Spring, an endless stream of darling bakeries, and an optimal location a stone’s throw from the (very real and very royal) Buckingham Palace.

But while the London Belgravia is lovely, you should know that the Belgravia depicted in the Princess Switch 1 is actually the Romanian town of Carei, in the Satu Mare county, close to the Hungarian border in north-western Romania.

Not only can you find the Belgravia Royal Castle here, this is also where they set up the set for the rest of the film as well. As Margaret might say, “SUPER!”

The few Belgravia scenes we see in the Princess Switch 2 were filmed in Scotland.

Is Montenaro a Real Place?

In the movie, Lady Margaret (AKA Vanessa Hudgens with a British-ish accent) is said to be from another country called Montenaro.

Sadly, Montenaro not a real place you can frolic in either.

That said, the name IS a pretty lazy spin-off of the real (gorgeous) European country Montenegro, which I can confirm is wonderful… so you can just go there and pretend it’s Montenaro if you really feel like it.

But if you are wondering where they filmed the Montenaro scenes from The Princess Switch: Switched Again, all those were filmed in Scotland. (More on this below!)

Where did they film the Chicago scenes of the Princess Switch?

The Princess Switch 1 starts in Chicago, where the protagonist Stacy (AKA Vanessa Hudgens WITHOUT a fake accent) runs a bakery and is high-key stressed all the time/heartbroken from being dumped by Paul (who we all hate).

And while the film does take place in Chicago, it seems the Princess Switch 1 scenes in “Chicago” were actually just a resourceful mix of stock footage and a cleverly disguised set in Romania, according to the Chicago Tribune.

Since the majority of the Princess Switch 1 was filmed in Carei, it’s a pretty safe bet that this is where they staged their faux-Chicago as well, made all the more authentic by Stacy’s in your face “CHICAGO” cap 😉

In The Princess Switch 2: Switched Again, the few Chicago scenes we had were filmed in Edinburgh, Scotland.

READ MORE:
25 Incredible Bucharest Photos That Will Ignite Your Wanderlust

Where is the Belgravian Princess Switch Castle?

As a girl who grew up on Disney, my first question while watching the Princess Switch was (mouth foaming) “where the heck is that amazing Belgravian castle?!”

Unsurprisingly, like Netflix’s Christmas hit last year (the Christmas Prince), the Princess Switch castle can be found in Romania.

The castle is in fact Károlyi Castle, located in Carei, in the Satu Mare county in north-western Romania.

They used both the interior and exterior of the Karolyi Castle for filming the Princess Switch, and while the castle already attracts upwards of 50,000 visitors a year, I’m sure that number is sure to grow among diehard romantics soon 😉

Where did they film the Belgravia scenes in the Princess Switch 1?

As I said earlier, the Princess Switch filmed in the Romanian town of Carei. According to the Gazeta Nord-Vest, filming took place in February and May and over 100 locals were recruited as extras for the movie.

According to my research, they definitely shot at the following locations:

Károlyi Castle: Again, the fancy magical castle that is home to the Belgravian royal family in the film.

Inside/in front of the former Town Hall: [SPOILERS!] They don’t give details about what specific Princess Switch scenes filmed here but I assume it was either the Royal Wedding scene or maybe they used it for the shelter (where Margaret and Edward visit/read with the children).

1 Decembrie 1918 Street: Where they set up a Christmas fair (all the stalls and booths that Margaret, Kevin and Olivia walk by when they’re stopped by that reporter who wants to write a feature on them, and right before they walk into the toy shop).

1 Strada V. Lucaciu (ish): This can be found just off of the 1 Decembrie 1918 street, and thanks to some stalking on Google Street view, I figured out this was the facade of Frederick’s Toy Store in the Princess Switch.

Lastly, again, while Belgravia is not a real place and the movie was shot in Romania, I did notice some clever usage of stock footage to supplement the fairytale wonderland vibe of the film.

Most notably, I saw some Christmassy footage from Brussels’ Grand Place used as an establishing shot while Margaret and Olivia are having hot chocolate before going shopping. See for yourself!

Oh, and right after this scene is when they have that weirdly intimate snowball fight (you guys know what I’m talking about).

Where did they film the Belgravia scenes in The Princess Switch: Switched Again?

The opening scene of the Princess Switch: Switched Again takes place at the Belgravia International Baking Competition. This scene was shot in Edinburgh’s Parliament Square as seen here.

The rest of the Belgravia Castle scenes were once again shot in Romania, although the main star of the second movie is definitely the dreamy Montenaro Castle!

where is the Montenaro Castle from the Princess Switch?

The Montenaro Royal Palace is where we see most of the action this time around in The Princess Switch: Switched Again.

The exterior of this palace is Hopetoun House in Scotland, a gorgeous stately home that is open to visitors if you fancy a trip to “Montenaro” yourself!

The dreamy interior though is a mix of Hopetoun House, Gosford House and Manderston House.

If you’re looking for that glorious marble staircase though, that actually belongs to Gosford House, as you can see in these photos. The cellars at Pembroke Estate looks like they were shot here too.

READ MORE:
10 Things to do in Covasna County, Romania (and Why You Should Visit!)

The beautiful marble entry way where Fiona struts in her with her “gift” was also Manderston House, specifically this room.

NOTE: The arched entryway and courtyard where Kevin has that super cute Christmas display set up for Margaret looks very similar to this service courtyard at Manderston, but it’s not a 100% match. Let us know if you know where this was filmed!

Where Did they Film the Montenaro Scenes in The Princess Switch: Switched Again?

If you’re looking for Montenaro in real life, go to Scotland!

The establishing shot and the party interior of the Montenaro Concert Hall is the Dome Restaurant in Edinburgh.

However, the interior of the actual concert hall bit is actually the Hub in Edinburgh, as seen here.

The tailor where we see Edward and Olivia shopping is Stewart Christie & Co in Edinburgh:

Meanwhile, the Montenaro Airport scenes were actually shot at the Edinburgh Gateway Station.

And lastly, the interior shots from Margaret’s coronation were filmed at Glasgow Cathedral.

Where is Pembroke Esate from The Princess Switch: Switched Again?

What about Fiona’s palace in The Princess Switch: Switched Again?

While it only appears briefly, the first establishing shot of Pembroke Estate is actually Wollaton Hall in Nottingham, England.

If you think it looks familiar, that’s because this was the property used for Wayne Estate in the Christian Bale Batman movies.

NOTE: Actual filming does not appear to have taken place there, according to Nottingham Post.

An additional establishing shot for Pembroke Estate appears to be from Manderston House, which is where they filmed other Montenaro Palace scenes.

Lastly, the interiors of Fiona’s Pembroke Estate appear to include this room in Gosford House (look for that unique silver crest in the background when Reggie is jamming out.

Did I miss any other notable Princess Switch filming locations?

I hope you enjoyed that short list of Princess Switch filming locations for the first two movies! Let me know in the comments if I missed any other ones you recognized.

Now, onwards as we all wait for the release date of the Princess Switch III…