As far as hopeless romantics go, I can admit that I’m a bit unorthodox.

Sure, like most others, I have entertained the idea of marrying Ryan Gosling and yes naturally, I’m a sucker for roses and candlelit meals… but the truth is, there’s a big part of me that would much rather put on my Ravenclaw scarf and just demand a date at Hogwarts.

So I guess you can say boyfriend done right when he actually took me.

Or I mean, the next best thing: Universal Studios Hollywood, where you can find the magical Wizarding World of Harry Potter.

Last month, I had probably the best date in my whole entire life… all within the walls of a cheesy amusement park. And I know you might think that theme parks are exclusively for kids, parents with kids or maybe groups of friends who haven’t gotten the memo about adulting, but I assure you: Universal Studios Hollywood is the perfect destination for couples. Read on for a guide on how to plan the ultimate romantic getaway to Universal Studios Hollywood!

Where to stay: The park is super centrally located in LA, so you don’t necessarily need to stay at one of the nearby hotels (there’s a Hilton and Sheraton on-site). Staying anywhere in Hollywood will place you close to the park. As long as you have access to the Metro (the park is at the Universal City station) or a car, then you’ll be fine.

When to go: Of course, as a couple, minimizing the number of screaming children around is a must. You’ll want to avoid peak times like weekends and holidays (especially when the kids are off school).

What to wear/bring: Opt for comfy clothes and shoes that you wouldn’t mind getting wet! A waterproof daybag is a must, and remember to pack for some layers since it can get chilly at night.

READ MORE:
How to Avoid Crowds in Dubrovnik 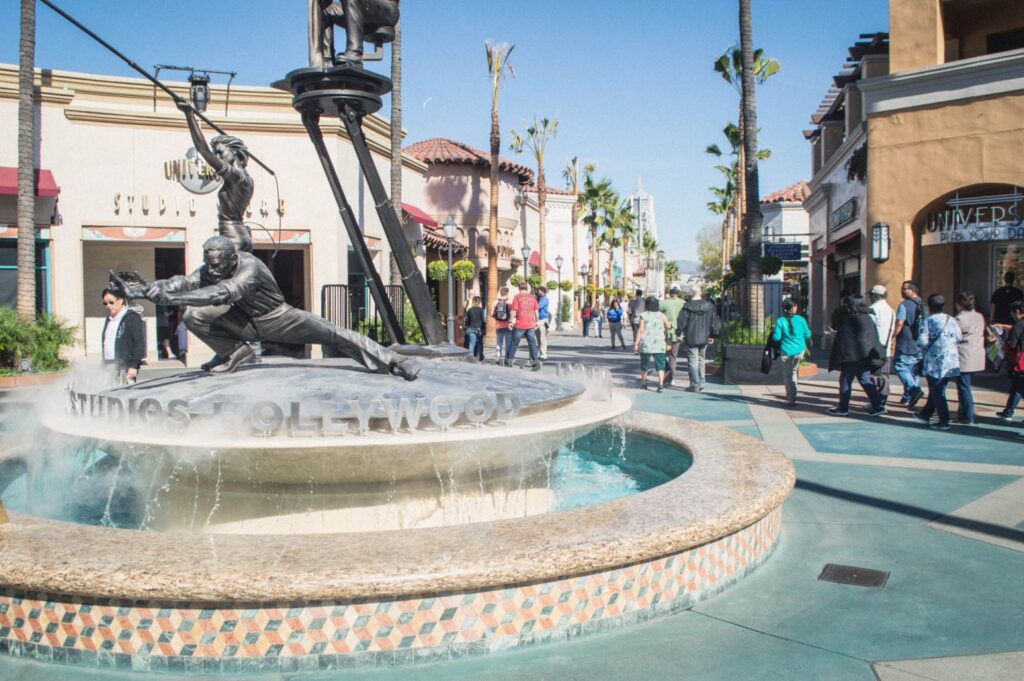 The park is huge, but doable in a day if you plan correctly! Here’s a quick overview of the different sections you can look forward to.

Roam around Super Silly Funland (from Despicable Me), enjoy a beer at Moe’s Tavern or try your luck at being zombie bait in the Walking Dead attraction. The Upper Lot is home to some of the park’s lower impact rides like the Simpsons Ride, the Despicable Me Minion Mayhem and the Shrek 4D experience. AKA for scaredy cats like me! This is also where you’ll find a lot of gift shops, restaurants and shows… plus the park’s recreation of Springfield (from the Simpson’s), and yes, it’s pretty amazing. 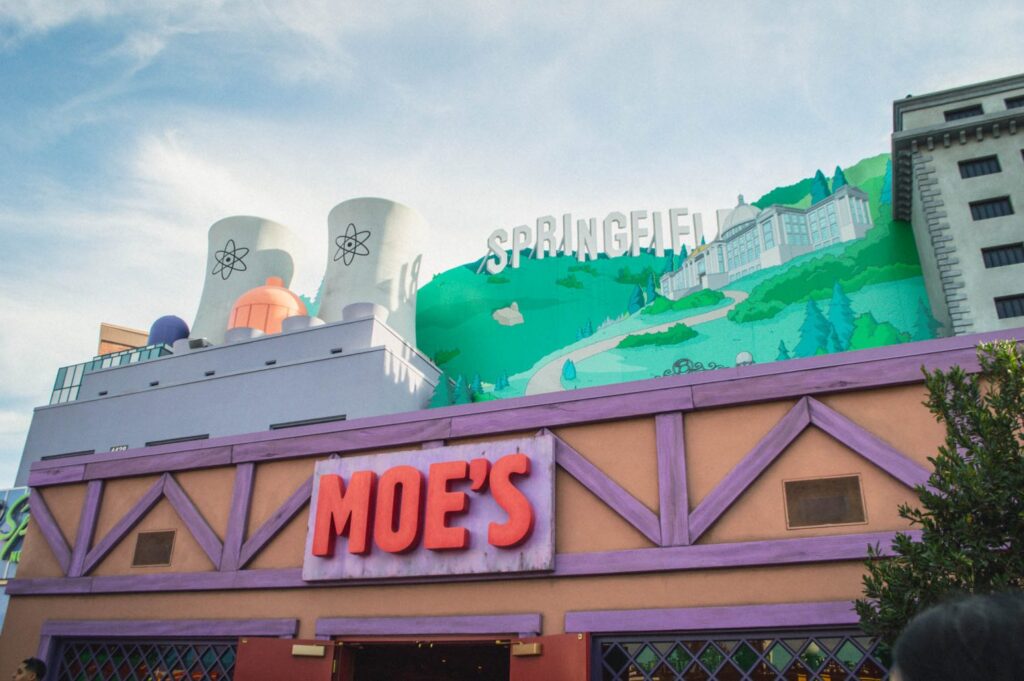 The Lower Lot is where thrill junkies get their fix. Famous rides like the Revenge of the Mummy, Jurassic Park and Transformers can be found here. To arrive at this adrenaline haven, you’ll be relying on a series of suuuuper long escalators called the Starway which can take 5-10 minutes to traverse depending on how busy it is. For this reason, aim to do all the Lower Lot rides at once, to avoid going back and forth.

The Wizarding World of Harry Potter

The newest park attraction and by far my favourite! Arrive early to avoid disappointment. Here, you can walk through real-life Hogsmeade, with wonderful gift shops like Honeydukes and Ollivanders, grab a bite to eat at the Three Broomsticks, or of course, go for a ride on The Flight of the Hippogriff. The ultimate star of this section is the Harry Potter and the Forbidden Journey ride, which is honestly the most mindblowing ride I’ve ever been on in my entire life. I smiled like a crazed child and went 3 times. A must do!

READ MORE:
Best Places to Eat in Rome (Near the Tourist Hotspots!) 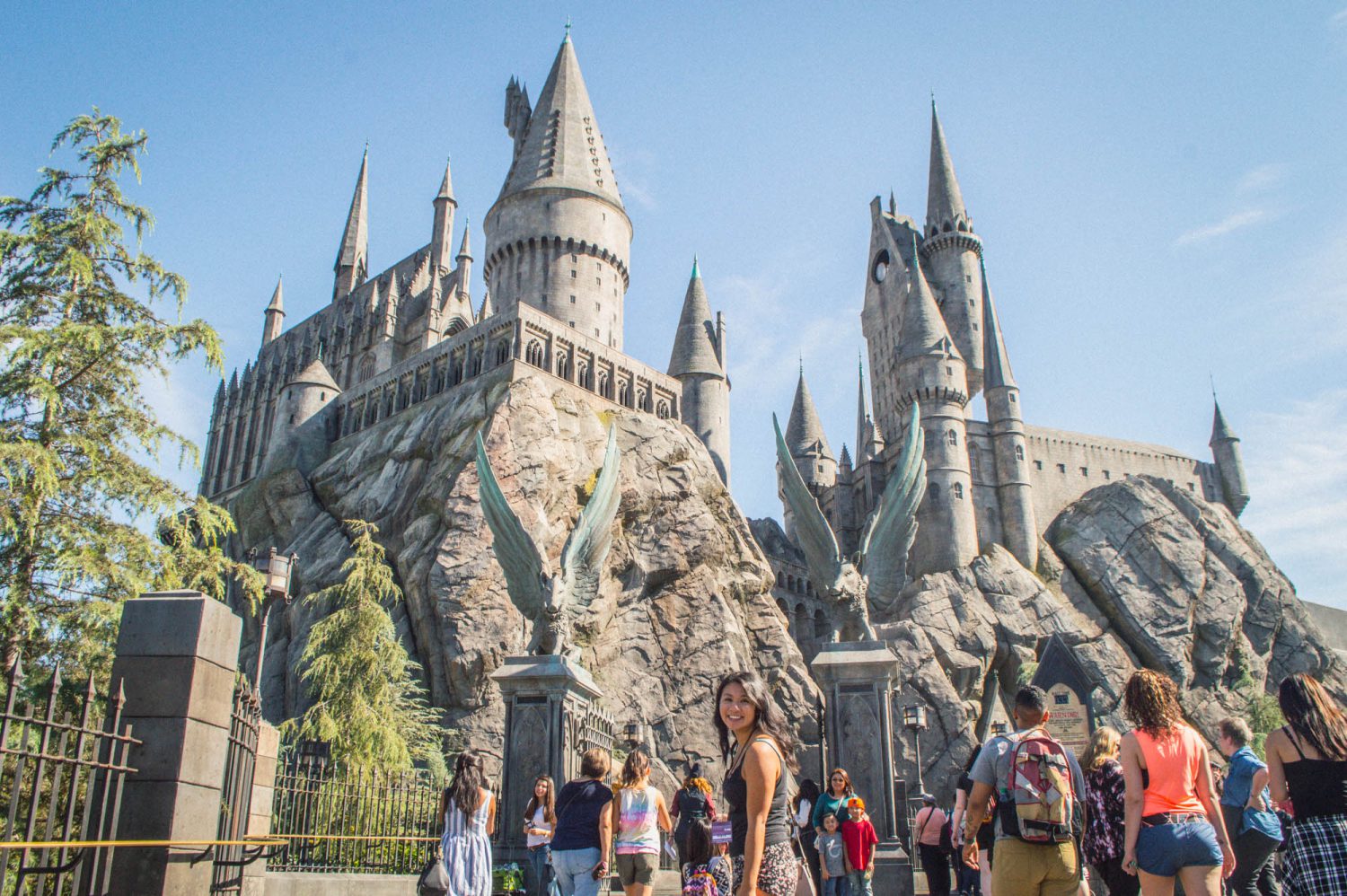 You’ll be given a schedule of the day’s shows upon entering the park, so be sure to strategically pick which ones you’ll want to attend. The Waterworld stunt show is a classic, but the Special Effects Show and Animal Actors show are really fun to watch as well. 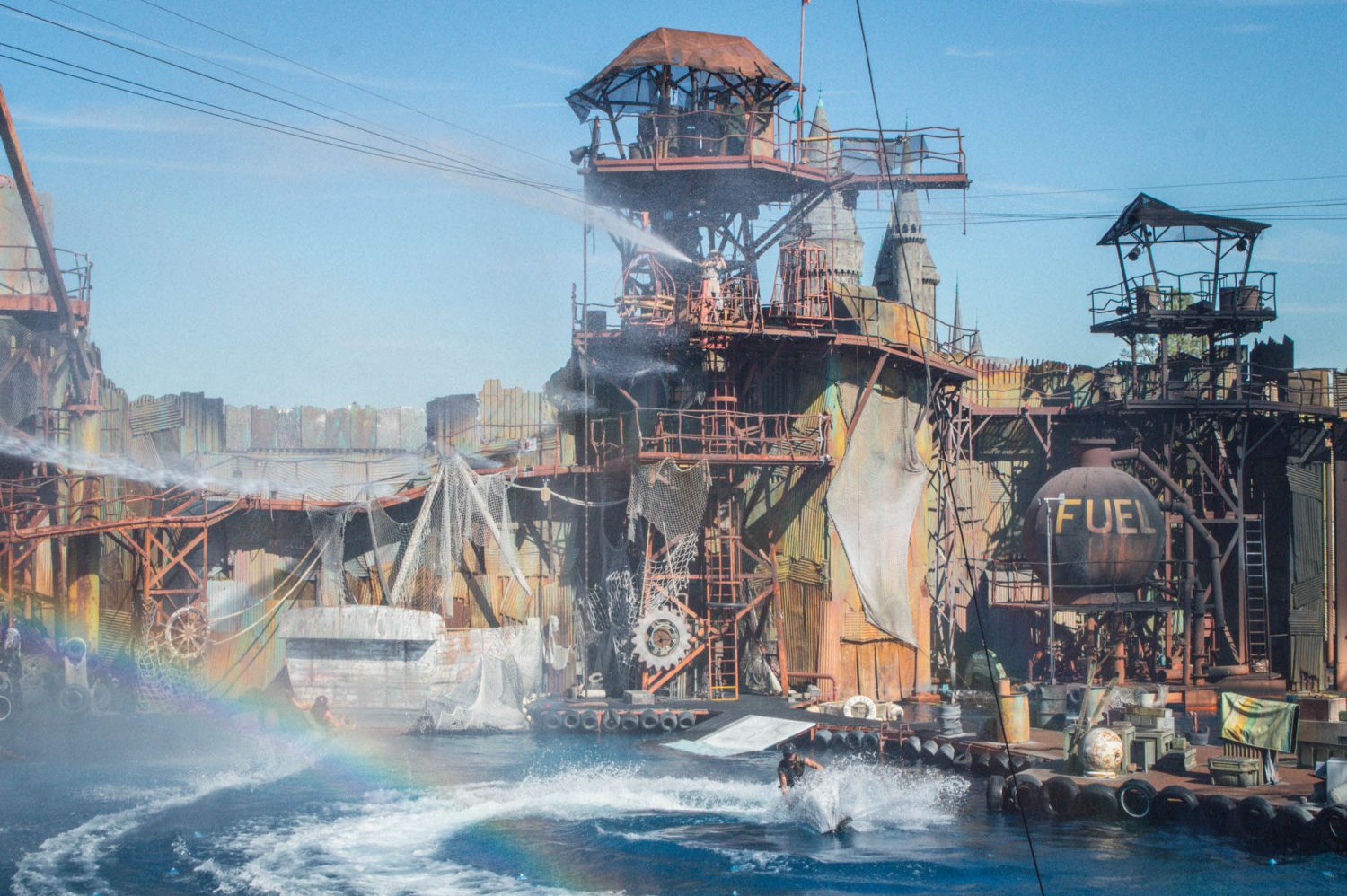 The studio tour is by far one of the best (and most famous) attractions in the entire park. Tours last about an hour, and are available in English, Spanish and Mandarin. During this hour magic ride of happiness, you’ll be taken through the famous Universal Studios backlot on a multi-car tram, where you’ll get to see famous sets, props and lots of cool surprises along the way. Prioritize this attraction because it’s a must!

If cheesy photo opps are your thing (which, let’s be honest, of course they are), be on the lookout for different characters who will be roaming around the park. These include the minions, the Simpsons, Scooby Doo, Spongebob, Shrek and many more.

One of the biggest dampers on the day would be waiting forever in line just to get in. Avoid this by planning ahead and getting your tickets in advance online! You can browse the different ticket options on the Universal Studios website.

Now, one of the big questions when it comes to Universal Studios Hollywood is: are the fast passes worth it? And while I acknowledge that they’re rather pricey, they did genuinely save us hours of waiting in line, and I can’t imagine how our day would have gone without them. We were able to basically walk right into most rides (with no more than a 10 minute wait on any attraction). If you’re on a time crunch (e.g. working with only a day at the park), then this pass will be an absolute lifesaver. 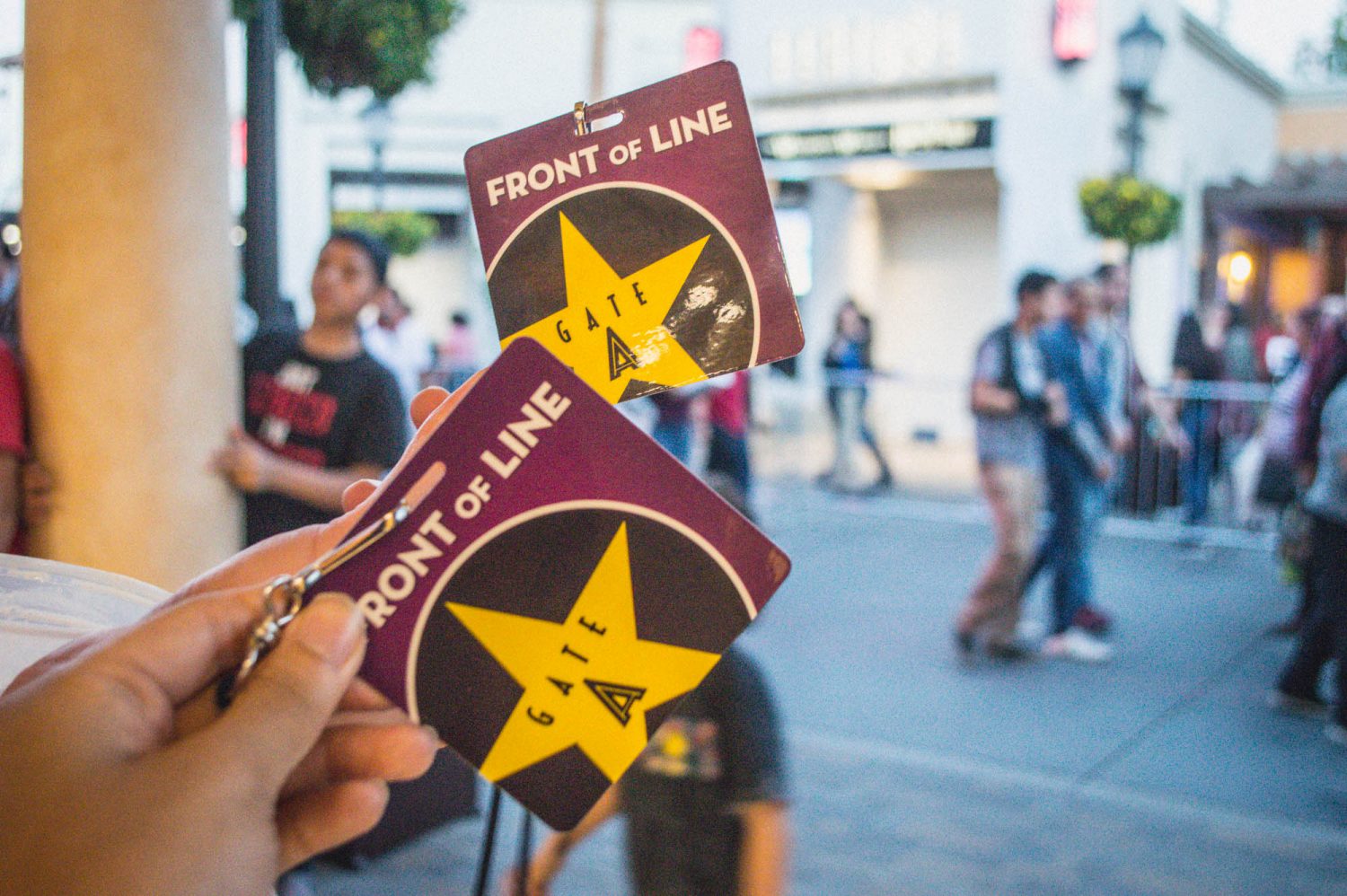 I’m not going to lie, Universal Studios provides fertile ground for explosive arguments. There’s long line-ups, screaming children and in the summer, searing heat. Without a game plan laid out for the day, it’s likely that you’ll miss something you wanted to do/see, or spend more time arguing than doing anything else.

I suggest mapping out your day according to which shows you want to see. Because these shows occur at set times throughout the day, they’re the least flexible part of your itinerary, so pick the ones you want and go from there. You’ll receive a schedule of the day’s events when you enter the park.

Next, it’s a good idea to be strategic about which attractions you do first. If you arrive shortly before the park opens, you’ll have free reign to the lowest wait times you’ll receive during the entire day, so if big time attractions like the Wizarding World of Harry Potter are high on your list, be sure to do that first. It would also be smart to do the park section by section as some bits (especially the Lower Lot) take a while to get to. Bouncing back and forth between sections will lose you a significant chunk of time.

3. Be ready to compromise.

The thing about ensuring this day is special for you both is to compromise. For instance, my boyfriend is a major Walking Dead fanboy, so of course he wanted a go at the immersive walk-through experience, where zombies pop out from dark corners with the goal of making you pee your pants. Now, did I want to be ushered through a literal death maze filled with flaming zombies and regret? No, no I did not. I mean… I cried once on the ferris wheel, so clearly I’m not built for fear. BUT, did I still do it? Yes, because apparently I hate myself. My eyes were firmly shut the whole time, with my boyfriend guiding/shielding me the entire way, and somehow I still found a way to scream my head off (even though I saw nothing but literal blackness).

READ MORE:
Singapore Insider Guide: Things to do in Singapore

So looong story short, be ready to make compromises to ensure you both have the best day possible. 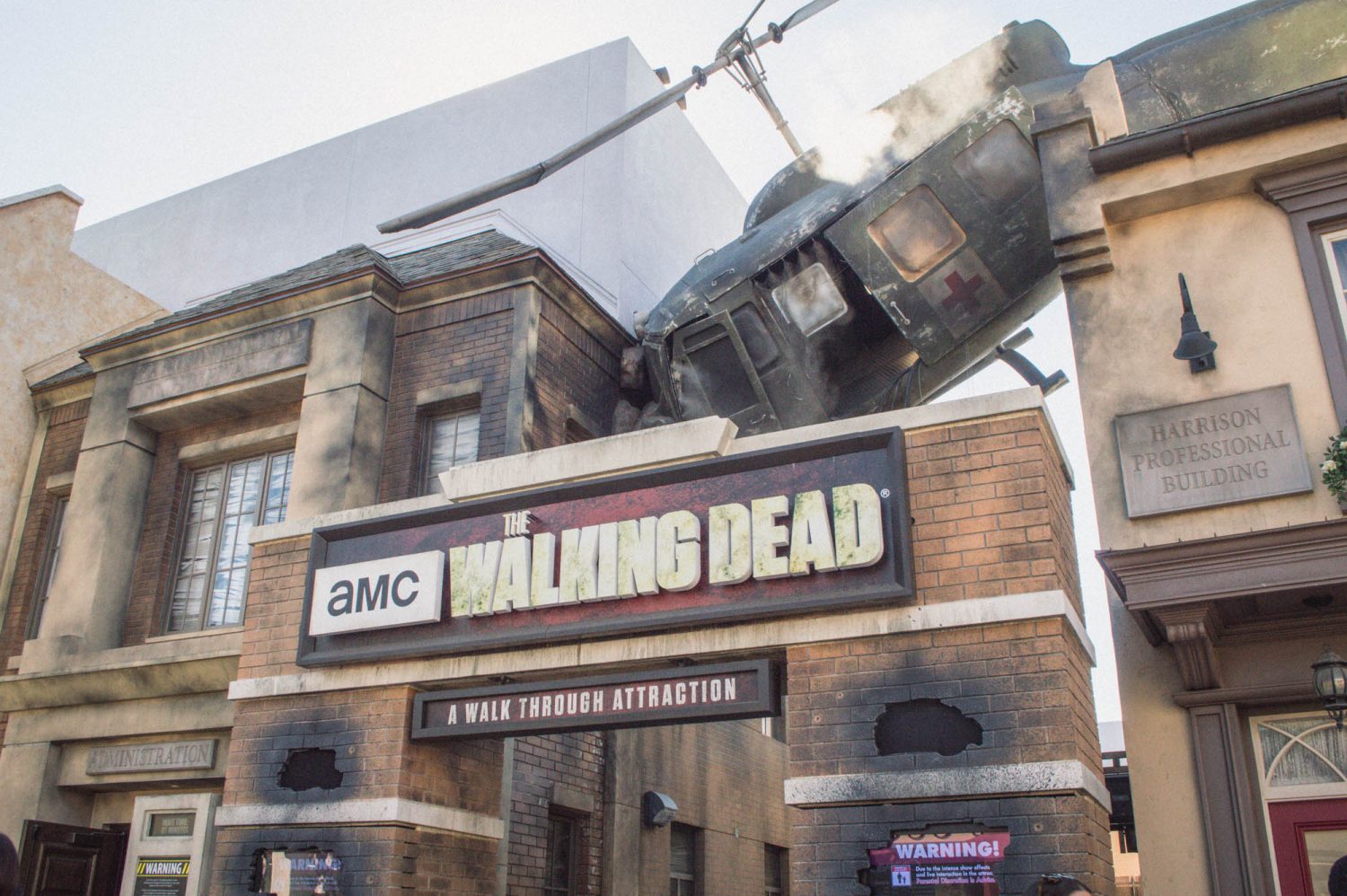 4. Be unashamedly enthusiastic! And encourage your partner to do the same.

The worst thing you can bring with you is a “meh” attitude. There’s no better place to embrace your inner fanboy/girl than here, so dive headfirst into your childish enthusiasm! Nobody likes travelling with a buzzkill, so if your significant other is freaking out at the sight of something, play along (aka fake it til you make it), even if it means taking embarrassingly cheesy photos every second. 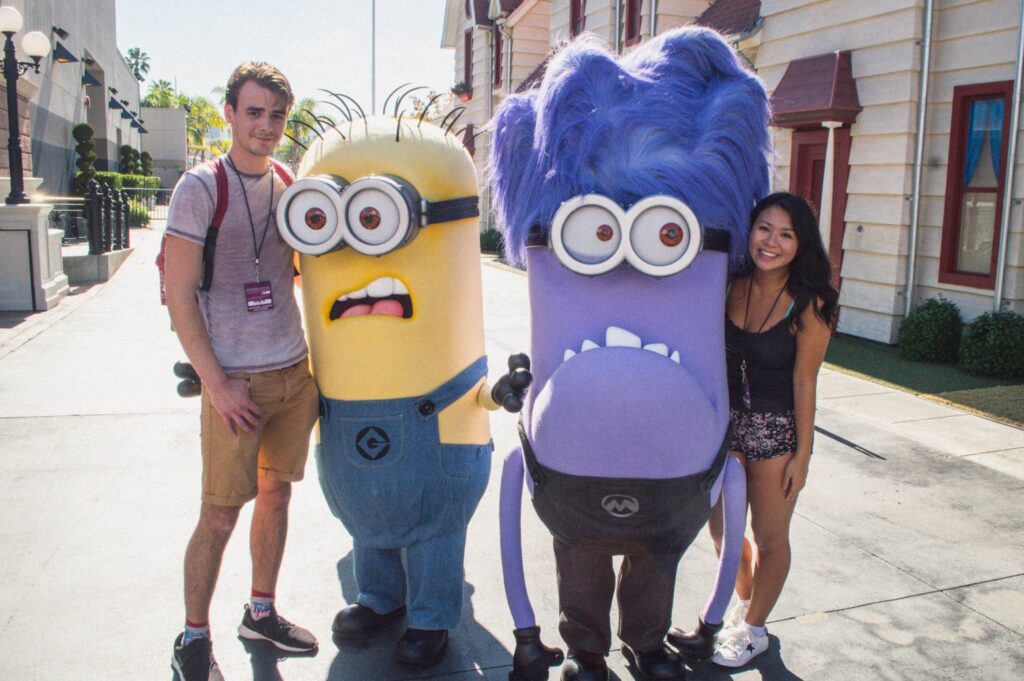 In sum – if you’re considering a romantic holiday to LA, then Universal Studios has to be on your list! Now grab your wizard robes and go wild.

I was a guest of Universal Studios Hollywood but all tips and opinions are my own!