You know what? I have to admit, sometimes I love it when things go wrong.

Tales of misadventure are my favourite because they’re the funniest, and well, like any optimist who hates dealing with their problems, laughter is my coping mechanism of choice. You see, when things go awry for me (which, I admit, is often), I remind myself that no matter how scary, awful or random things are at the moment, a hilarious new story is waiting at the finish line.

With that in mind, I want to tell you about one of the most ridiculous nights of my first backpacking trip in 2014 – my accidental foray into Berlin’s alternative nightlife scene. In a single night, I braved a gothic horror bar, a boozey Ping Pong pub, some punk rock tavern and a gay club nestled in an underground parking lot. An epic adventure for sure, which, like all great journeys, began because of a mistake.

This is the story of how I accidentally ended up on Berlin’s 666 Anti-Pub Crawl.

Truth be told, it was pretty much all my fault. As cliched and touristy as it was, I had my heart set on attending at least one pub crawl during my time in Europe. After all, don’t knock it until you’ve tried it right? When we arrived at our hostel in Berlin, it seemed like it was fate that the welcome chalkboard wrote in bold letters: “PUB CRAWL TONIGHT – MEET IN THE LOBBY AT 8:45”. I figured, of all places, why not Berlin? Despite my travel partner’s reluctance, she gave into my puppy dog eyes.

That was her first mistake, because I should not be trusted with decisions.

A few hours (and coats of makeup) later, I had my party girl disguise on, eager to blend in with the throngs of cool, Berlin partygoers. We were led to our first bar by a slightly-out-of-it tour guide, who rolled his cigarettes on his lap as we sat on the tram. Ha, oh Berlin, you so alternative.

Our night began at Yesterday, a quirky cocktail bar decked out in a crazy, over-the-top mish-mash of decor. Sunflowers topped the blue ceiling, with assorted knick knacks clinging to the walls. There was just about anything you can imagine filling the corners of this place – even pinball machines. Our group appeared to be the only ones there, so we took this opportunity to get acquainted with everyone, shouting introductions over the mellow mix of 60s-80s oldies.

So far so good, I thought to myself. I’m so freaking hip! These people have no idea I’m a 20 year old granny.

A few potent cocktails later it was time for us to venture into the great unknown of Berlin’s nightlife. We were ushered outside, and huddled around our tour guides, one of which began with a compulsory spiel on what a great night we were going to have.

But, we knew something was off when he ended this pep talk with “Welcome to the 666 Anti-Pub Crawl!”

That didn’t sound right. 666? Anti? It seemed like there was a simultaneous epiphany on our parts that this wasn’t what we had signed up for. My group exchanged confused glances… Hmmm, the hostel never mentioned that this was, in fact, an “alternative” pub crawl and that we would soon be whisked away to solely off-the-beaten path nightlife destinations in Berlin.

Full disclosure: I’m not much of a partier. Yes, I’m a huge fan of wine and beer, but even at home in Canada, clubbing and going out is not my activity of choice. This chronic homebody syndrome was probably a huge source of my discomfort throughout the night. Luckily, I’m a much braver soul when I travel, so I wasn’t too phased initially… I mean, what was the worst that could happen?

We were promptly separated into three groups, our new friends ripped from our clutches as we were dragged separately into the glittery abyss of Berlin’s party scene. With enthusiasm, our tour guide informed us of our first stop: Dr. Pong!

If the name doesn’t give it away, Dr. Pong is a ping pong bar. What exactly does that mean? It is literally what it sounds like – a bar where people play ping pong. Immediately as I entered, I got the feeling that I wasn’t supposed to be there. It had a seedy garage feel to it, with bare decor and a single blue ping pong table in the centre of the room. “Oh my god we’re in a crack den”, exclaimed my travel partner. She tends to be a worrier, and maybe she was being a little dramatic, but I felt some truth to her words. The bar’s windows were suspiciously covered, and the entire space had a grungier feel than us innocent girls were used to. No doubt, we were out of our element.

READ MORE:
Oktoberfest on a Budget: The Ultimate Guide

But alcohol could fix this right? A minimalist bar was set up in the back, so I grabbed myself a beer and took a seat on a creaky plastic chair. Drink until this feels okay was kind of the motto for the night. 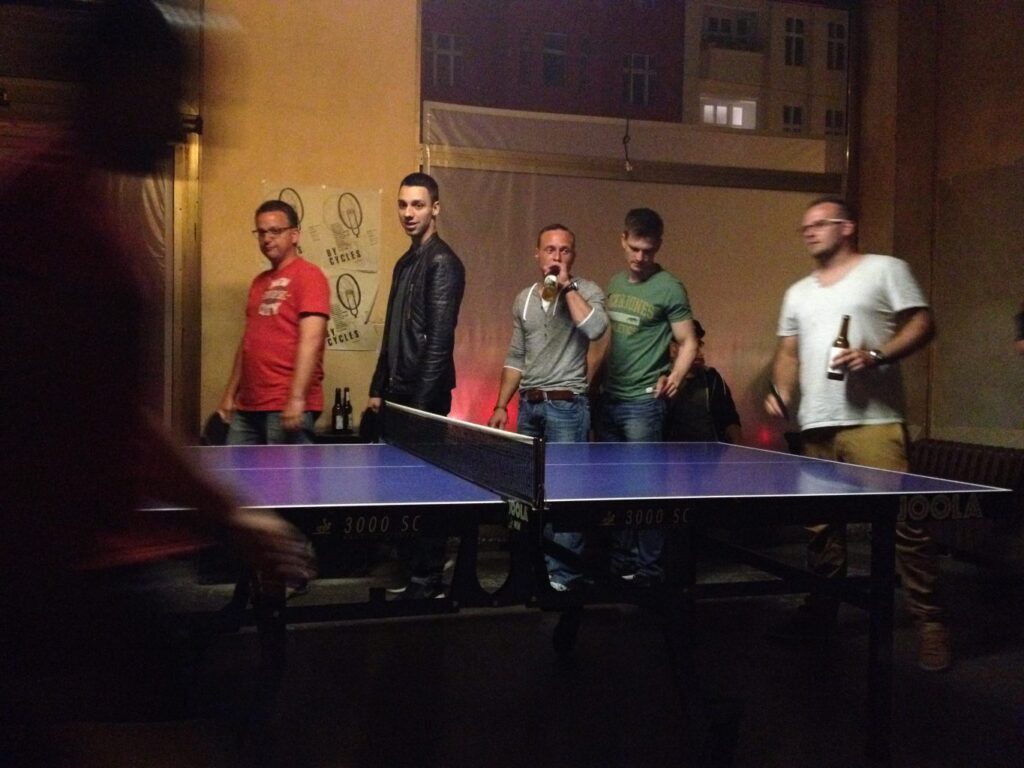 A ping pong bar. This is literally what it was like.

After watching some sweaty men circle around the table playing ping pong, we were whisked off to our next stop. But first, we were treated to some free shots on the sidewalk! No doubt, I wasn’t in Canada anymore… But again, drink until this feels okay, right?

The next stop of our adventure was Last Cathedral, a heavy metal-blasting gothic horror bar.

… Talk about not fitting in.

The decor of this place was crazy. With skulls lining the bar counter and torch lighting on the walls, I felt like I was in Dracula’s basement. I’m pretty sure the locals could smell my nervous sweat from miles away. Apparently it was singles night too, so yay lucky me. Berlin’s gothic horror crowd (is that even a thing?) was out in full force, and they sure were singles ready for minglin’. I’ll never forget trying to dance to heavy metal that night, a feeble attempt at fitting in with the lone dancer – an enthusiastic German headbanger who flung his majestic mane like nobody’s business.

To ease my discomfort, I ate nachos here. I like nachos.

I didn’t take down the names of our last two stops, but nonetheless, we journeyed onwards. The first was a tavern featuring a live punk rock band. I think this spot was the most in my element. I love live music, and the band playing was pretty cool. Save for the eye-stinging smoke machine, I was rather into it. This stop gave us a chance to relax a bit, especially after braving three bars that were way different from what we were used to. My travel partner was no doubt ready to murder me for this accidental adventure at this point, but I tried my best to laugh it off. After all, travelling is your time to live a little and try something different. Even though some of the stops felt sketchy and unsuited to my taste, I learned a very valuable lesson that night:

girlll, sometimes you just gotta go with the flow. [read this in a sassy voice for optimal effect]

After our chill punk rock session, we headed out to our last stop of the night, where we were reunited with our entire hostel group. What magical place marked the end of this wonder tour, you ask? Of course, it was an underground gay night club! And when I say underground, I mean they literally brought us into a small elevator and lowered us into a smoky parking lot. Well folks, I guess it doesn’t get more Berlin than that, right? With blaring electronic music, glittery drag queens and an alarming lack of ventilation, it was a thoroughly interesting end to a crazy night.

As we trekked back home, I couldn’t help but laugh to myself about the last few hours and where I had been. Sometimes, travelling brings you the most random moments and adventures. Absolutely, I was out of my comfort zone and felt totally sketched out half the time, but there was honestly no reason for me to be scared. I was in a completely different part of the world, spending time where locals do, taking in new cultures (and subcultures!) that I would have never otherwise encountered. At the end of the day, isn’t that what travelling is all about? Looking back, I could (and should) have been more openminded… and that’s a big lesson I learned for sure.

And although this little nightlife adventure was a bit much for my prudish, Canadian heart, it is still to this day one of my favourite memories from my Europe trip. There’s something about Berlin’s nightlife that you just don’t forget. Regardless of whether or not I’d do it again, it’s safe to say: I had my taste of Alternative Berlin, and a great story to toss around for the rest of my life.

Well guys, have you ever been on an accidental adventure like mine?