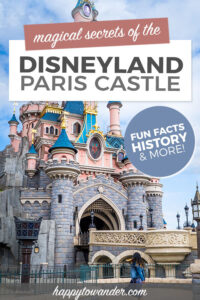 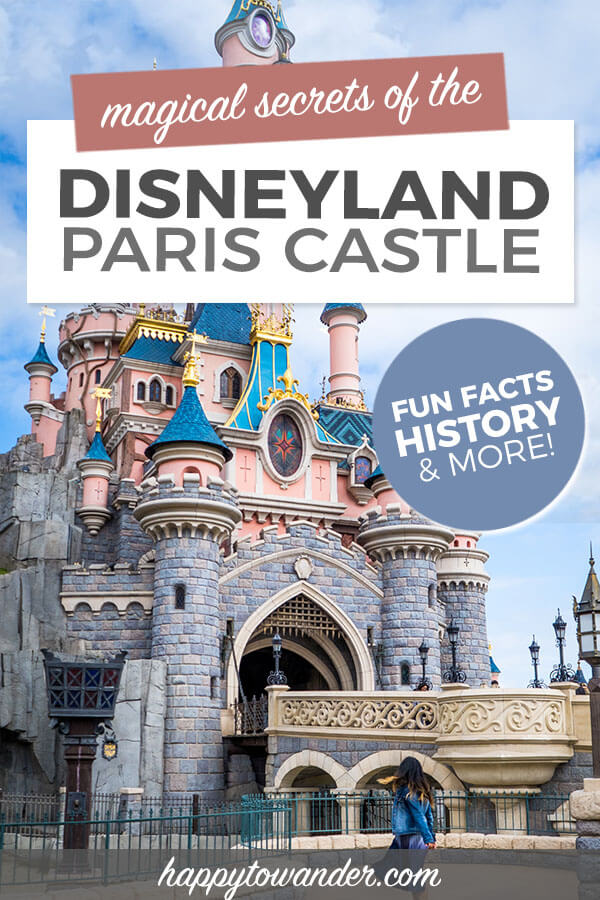 Of all the magical Disney castles to be found worldwide, I think the Disneyland Paris Castle might be my favourite.

With its pretty pink façade, bright blue spires and glittering golden turets, this beauty is the epitome of a fairytale castle, so much that it’s widely recognized as the most beautiful Disney castle of all the parks!

… and given Disney’s well-known reputation as the masters of magical, that’s pretty high praise.

So, if you’re a total dork like me and are curious about the design of the Disneyland Paris Castle, its various inspirations, and want to learn some insider secrets to the design as well, then this post is for you. After one of my (many) black holes of research the other day, I found so much cool information about the castle that I couldn’t help but jot them all down for you.

So, I hope you’re ready to learn an unnecessary amount of information about the Disneyland Paris castle…

Click here for my full guide on how to plan the perfect Disneyland day trip from Paris!

What is the Disneyland Paris Castle Officially Called?

As diehard fans will know, each of the Disney Parks is blessed with a unique castle. The one at Disneyland Paris is known as the Château de la Belle au Bois Dormant, AKA Sleeping Beauty’s Castle, making it one of three Sleeping Beauty castles in the world, alongside the ones in Anaheim and Hong Kong. 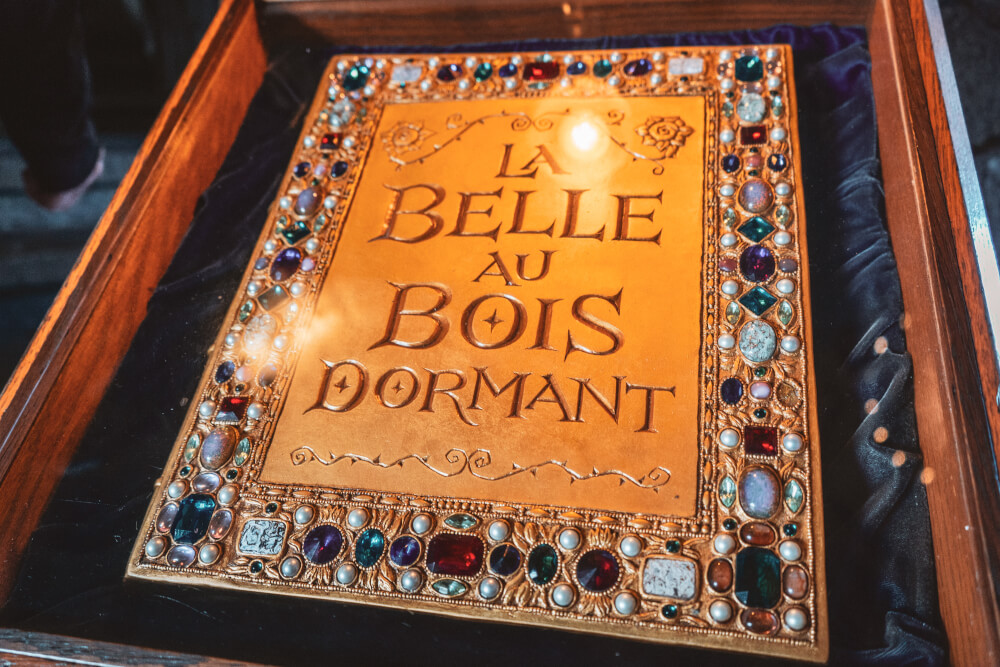 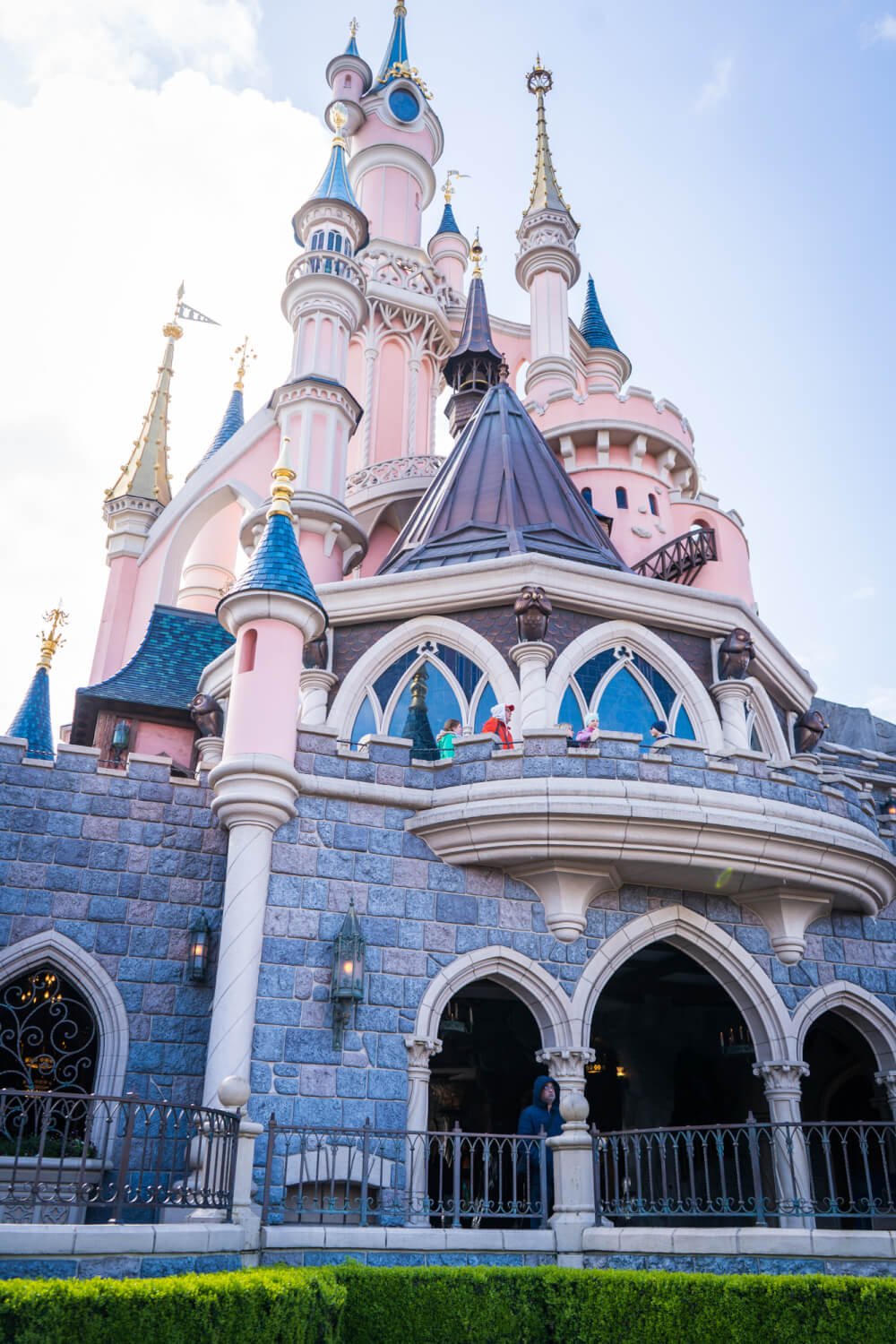 Where is the Disneyland Paris Castle?

And unsurprisingly, it serves as the focal point of the entire park. Located at the end of Main Street USA, the Château de la Belle au Bois Dormant is the park’s gateway to Fantasyland, home to iconic attractions like the Spinning Teacups and It’s a Small World waiting just on the other side. 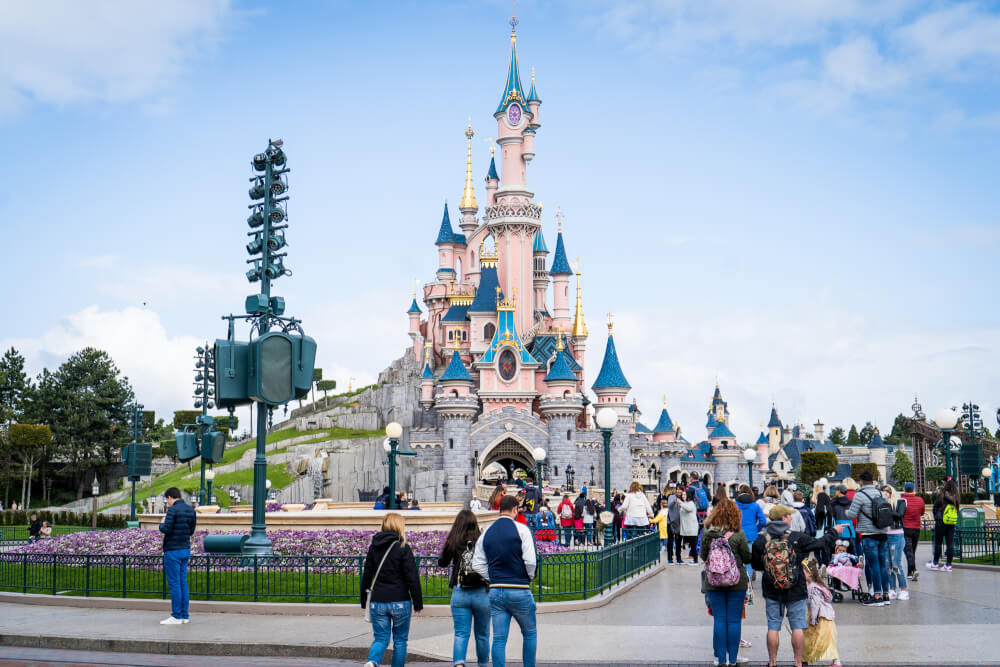 And by night, it becomes the canvas for the epic Disneyland Paris show “Disney Illuminations”, which uses lasers, fireworks and projections to create a (truly tear-jerkingly amazing) show for Disney fans to sob over. 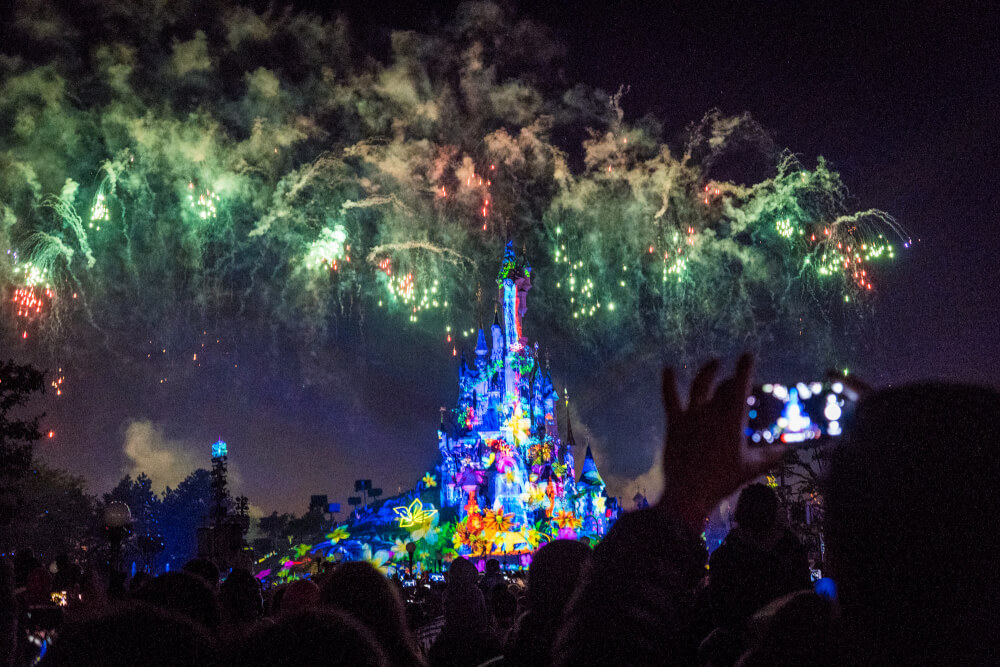 A Brief History of the Disneyland Paris Castle

As you can imagine, planning the design of the new Disneyland Paris Castle was stressful work.

The Imagineers in charge of the feat cycled through countless concepts and ideas, even momentarily considering a hyper-futuristic tower structure in lieu of a traditional castle. Here is an concept sketch of the idea from Tim Delaney, who also designed the Discoveryland at Disneyland Paris:

–
They eventually veered away from this idea though and went for something a little more classic. Other concept sketches (that look much more like the final Disneyland Paris Castle today) can be found as far back  as 1987, five years before the park opened to the public. Here’s one I managed to find:
–

After the concept was solidified, according to this video about the Disneyland Paris construction process, they began breaking ground at the site of the park on August 3, 1988. For several years, an international team worked around the clock to complete the park in advance of its public opening in 1992.

But although the castle was being built in Paris, its construction was still a thoroughly international affair. According to the book Disneyland Paris, de l’Esquisse à la Création, the towers of the castle were actually made in Italy and were shipped over and added to the castle on August 2, 1991.

Curious to see how construction unfolded? Here’s a cool timelapse of the Disneyland Paris castle being built!

Besides being more than 2x taller than the Sleeping Beauty castle at Disneyland in Anaheim (50m, compared to Anaheim’s 23m), the Disneyland Paris castle differs in a number of ways from its American counterpart.

For one, the Sleeping Beauty Castle in Anaheim was inspired heavily by the world-famous Neuschwanstein Castle in Germany. But, when it came time to create a magical castle for Disneyland Paris, Imagineers identified a unique challenge: since castles were so commonplace around Europe, they needed a little extra oomph and effort to make the castle just as magical for a European audience.

So the end result was a towering, whimsical pink and blue castle with 16 towers (ranging from 3-15m tall). Pink was chosen of course not just for its fun cutesy appeal, but also so it would pop better against the (often) grey skies of Marne la Vallée.

Besides just being a beautiful backdrop for photos though, the Disneyland Paris Castle serves as a wonderful walkthrough attraction, with the inside of the castle decked out in fun details like tapestries depicting Sleeping Beauty’s story, beautiful stained glass and of course, little book passages (in French) scattered around. 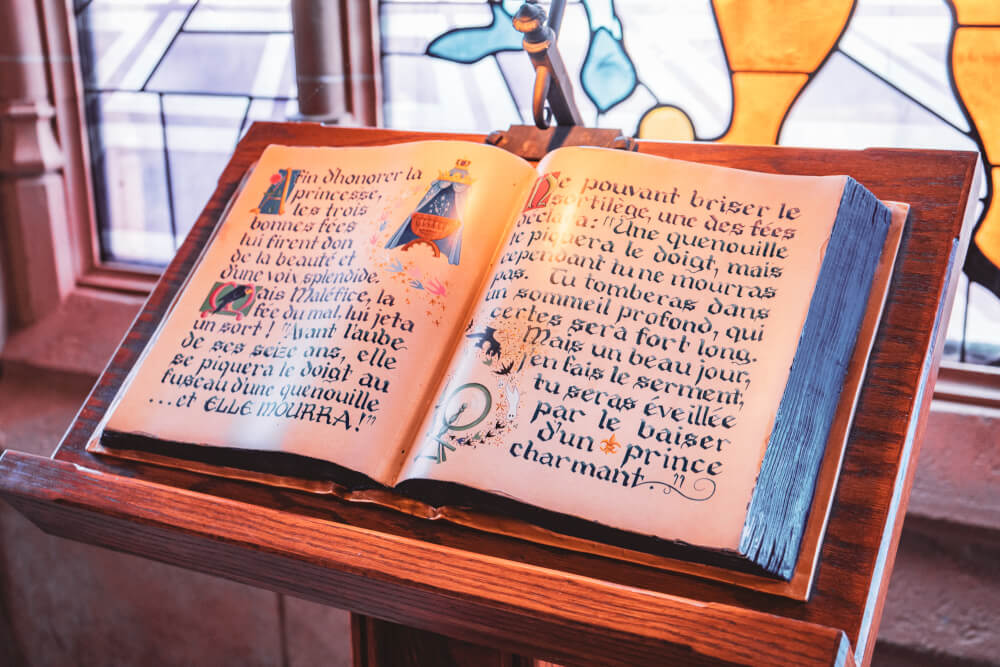 In terms of architectural style, it’s hard to nail down what this castle is exactly… that’s because it mixes elements from a variety of different styles, although the interior is most definitely Gothic-inspired. At first glance as well, you might get some deja vu from the castle, and that’s because it has taken inspiration from a wide variety of very famous buildings!

According to the book Disneyland Paris, de l’Esquisse à la Création, the design of the Parisian Sleeping Beauty Castle takes ample inspiration from iconic buildings around France. Its shape for instance is reminiscent of Mont St Michel, the windows are inspired by Château de Chaumont and the towers by Château d’Azay-le-Rideau (both in the Loire Valley), and the interior pillars were inspired by the twisted tree-like pillars at the Eglise Saint-Severin in Paris. Rumour has it even the tapestries showcasing Sleeping Beauty’s story inside the castle were inspired by the tapestries at Paris’ Musée de Cluny. 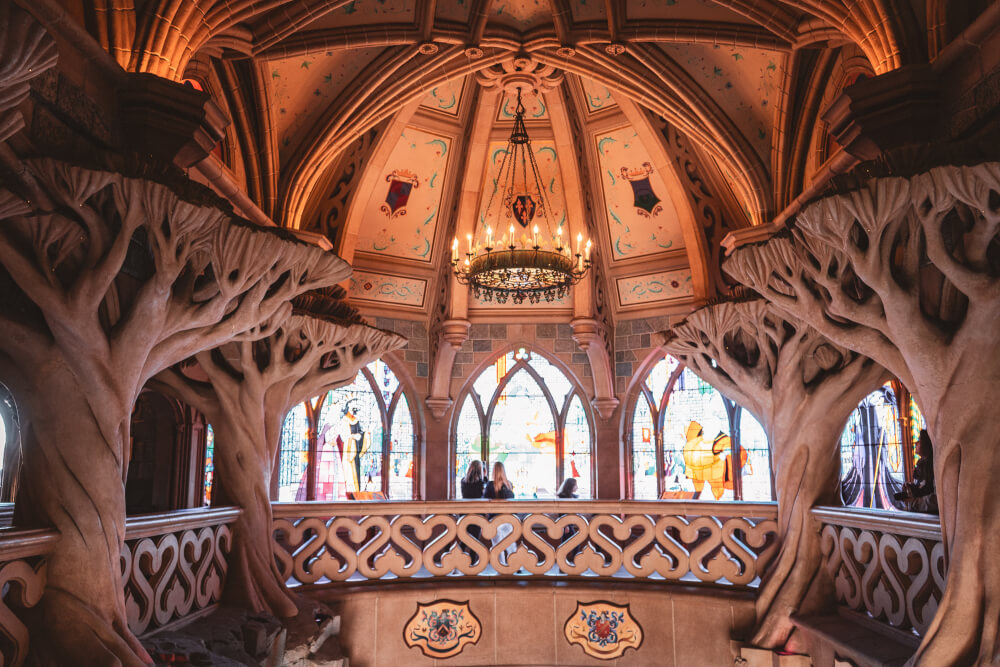 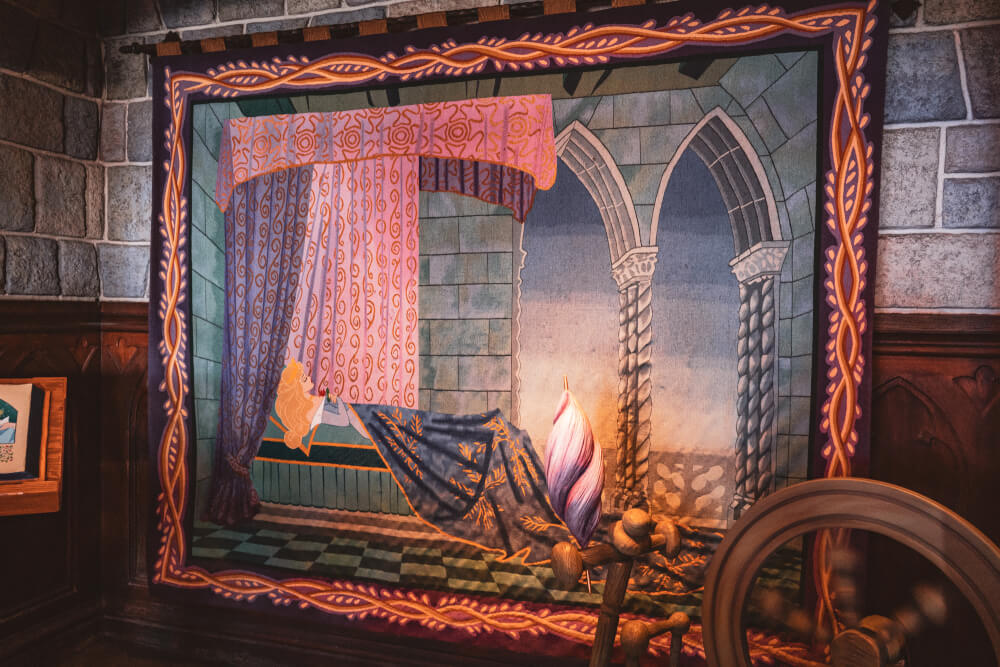 As for the golden spires and weather vanes? Supposedly these were inspired by illustrations from the French Gothic manscript “The Very Rich Hours of the Duke of Berry”.

But the attention to detail doesn’t just stop at the castle itself – it’s there in the landscaping too. The surroundings of the castle take great inspiration from the animated Sleeping Beauty movie, right down to the green hill it’s built on and the cubic trees that surround it. 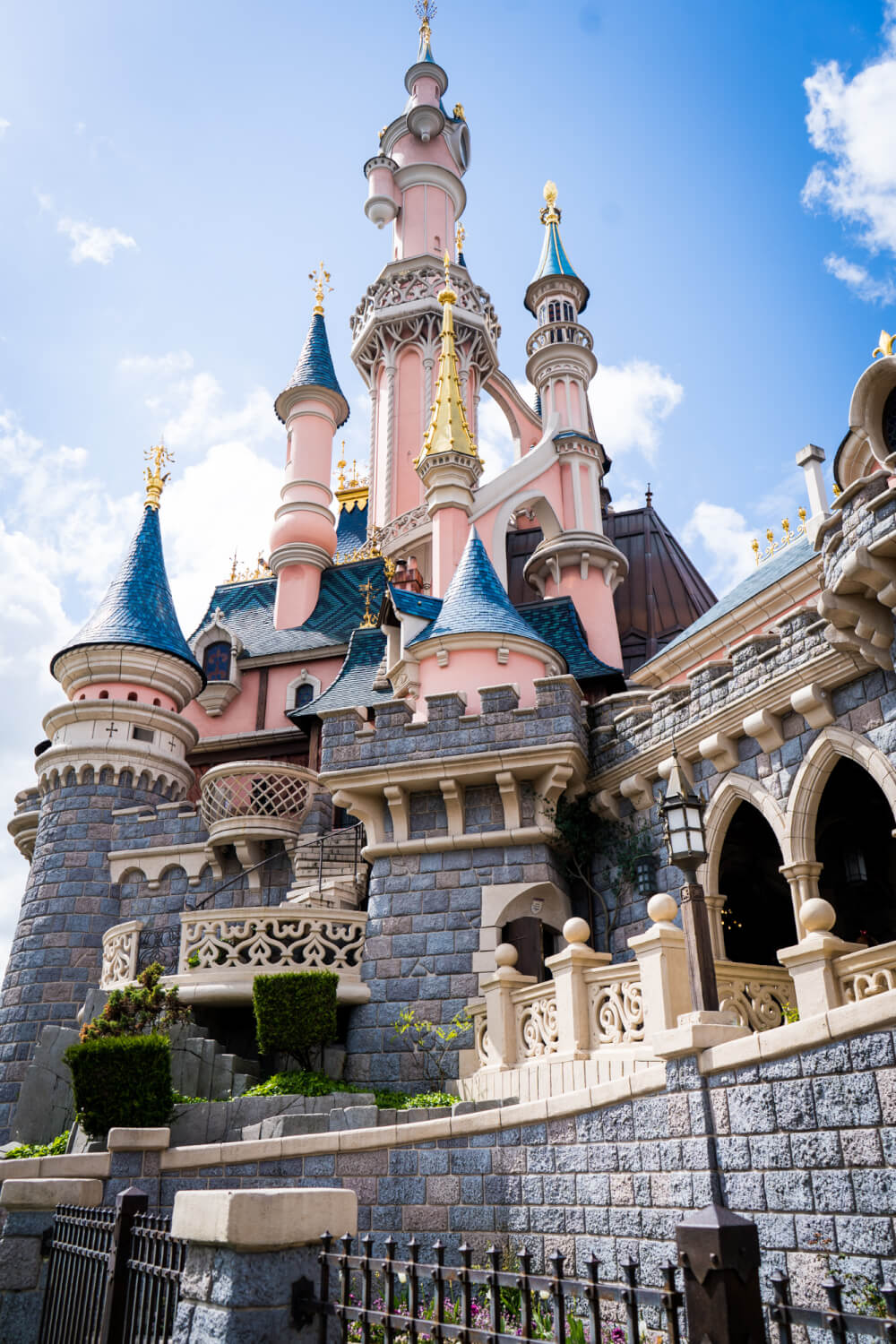 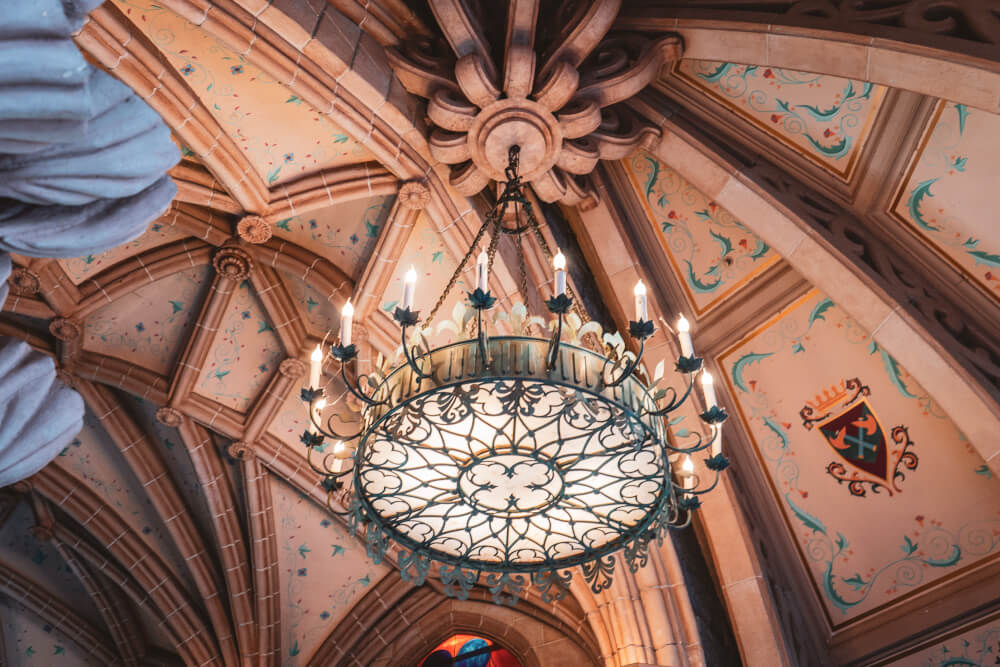 Last but not least, I have a bunch of fun facts about the castle too. Some are well-known, others not so much. Let me know in the comments if you have any others!

1. The Disneyland Paris Castle is the only Disney castle with its own dragon

Spanning 27 metres head to tail, the mysterious firebreathing dragon that lurks underneath the castle at Disneyland Paris is one of the most striking and unique features of the park. In fact, at the time of Disneyland Paris’ grand opening in 1992, this was actually the largest animatronic that had been built to date. 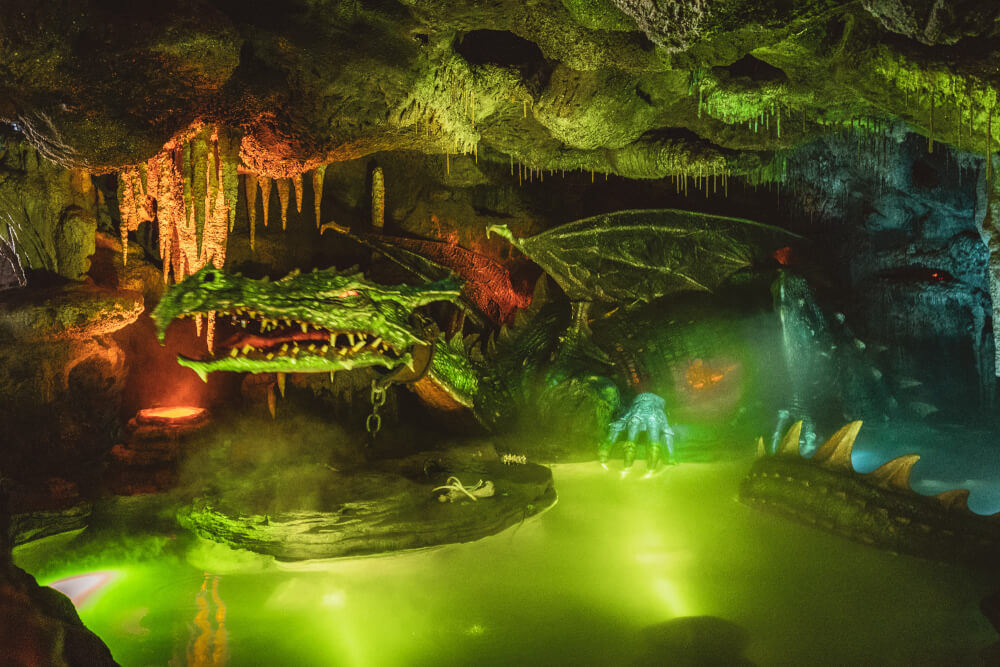 2. The orientation of the Disneyland Paris castle is highly strategic

The decision to make the Chateau de la Belle au Bois Dormant façade facing south is no coincidence… it was deliberately done this way to ensure the castle was gobsmackingly photogenic no matter the time of day. Its southward facing orientation means no backlighting at any point of the day, which I’m sure is a decision happily endorsed by scores of relentless Instagrammers. 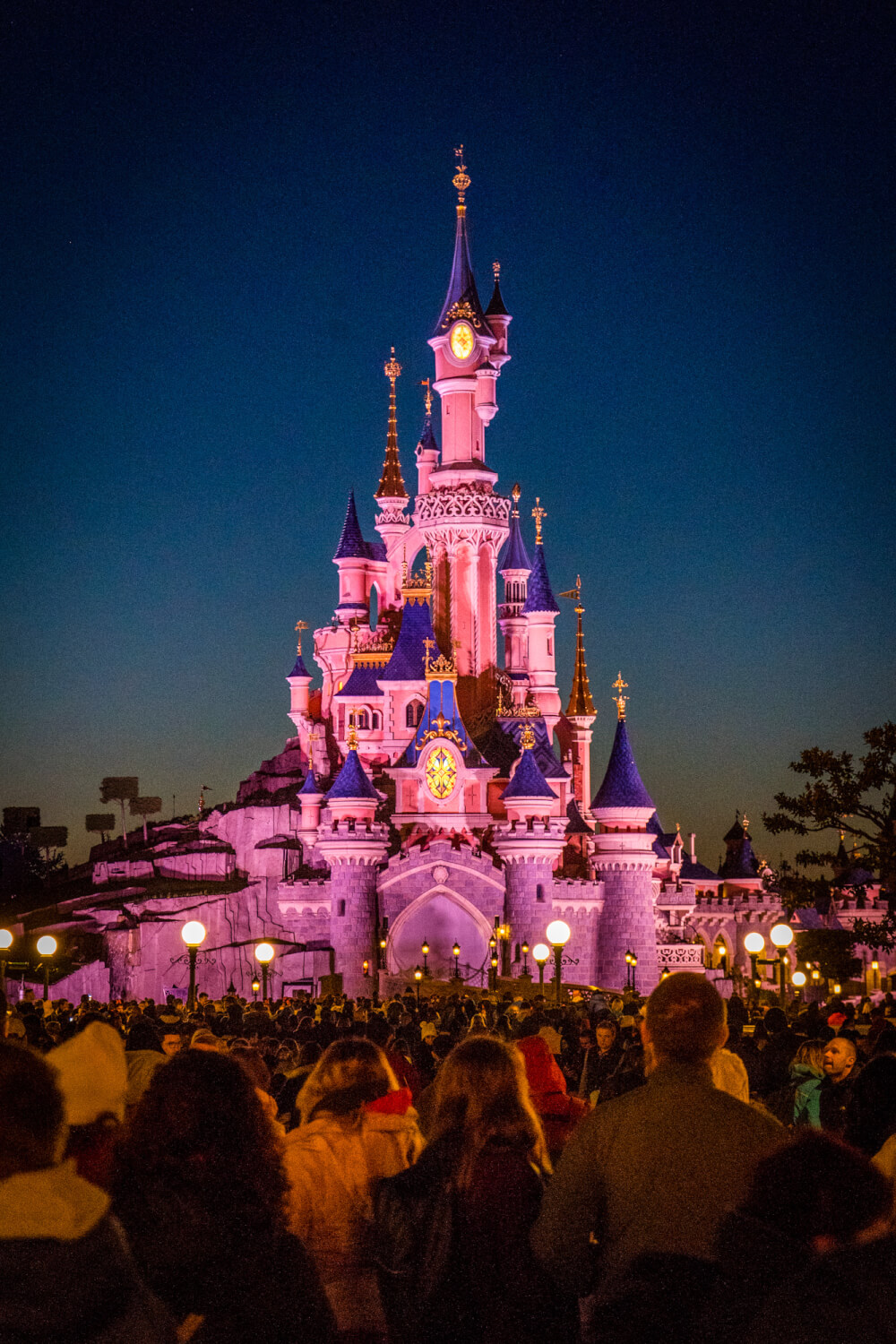 3. The castle looks bigger thanks to forced perspective 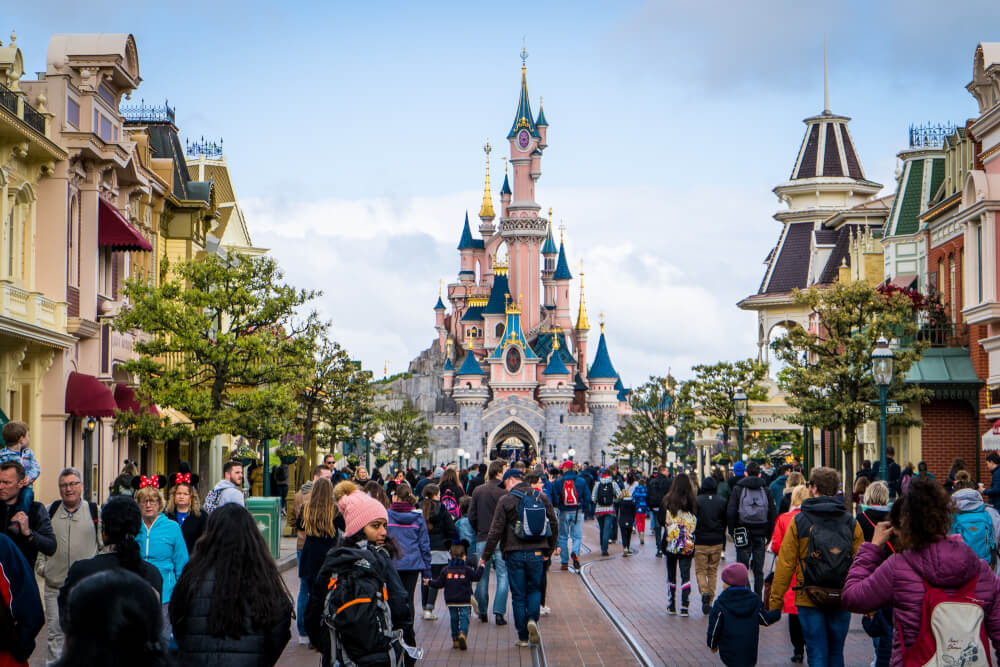 4. The castle is covered in escargot

If you look closely at the golden spires of the Disneyland Paris Castle, you might notice the peculiar addition of tiny golden snails seemingly running their way up the tower! While there’s no official statement on why these are there, we can assume they’re a nod to the French delicacy of escargot. In fact, many cast members joke that they’re there running away from a French chef.

5. The castle colours are a nod to Aurora’s dress

While the official reasoning for the castle’s pink and blue colour scheme is that these colours pop nicely against the often grey skies of the Paris region, some others note that the colours are a nod to Aurora’s dress(es) from Sleeping Beauty.

Remember when Flora and Merryweather were arguing about what colour to make her dress, zapping it into pink and blue as they argued? Whether this colour combo is just a coincidence or not (after all, pink and blue are pretty common colours), it’s a fun little detail to note about the castle.

And, bonus fun fact: According to Disneyland Paris, de l’Esquisse à la Création, Imagineers originally didn’t like the colours of the towers when they were first put up, so repainting them became the duty of Ron Esposito (the Imagineer who was in charge of the colours of facades around the park, yes, that’s apparently a real job). He had to repaint the towers in the moody weather of France in January/February, which was apparently not the easiest feat.

Glad he did it though! I mean look at how stunning it is:

6. The Disneyland Paris castle is home to some very sleepy guards

A fun easter egg for Disneyland Paris guests is that, if you listen closely, the guards in the castle are snoring away in their armour. Check it out the next time you visit! 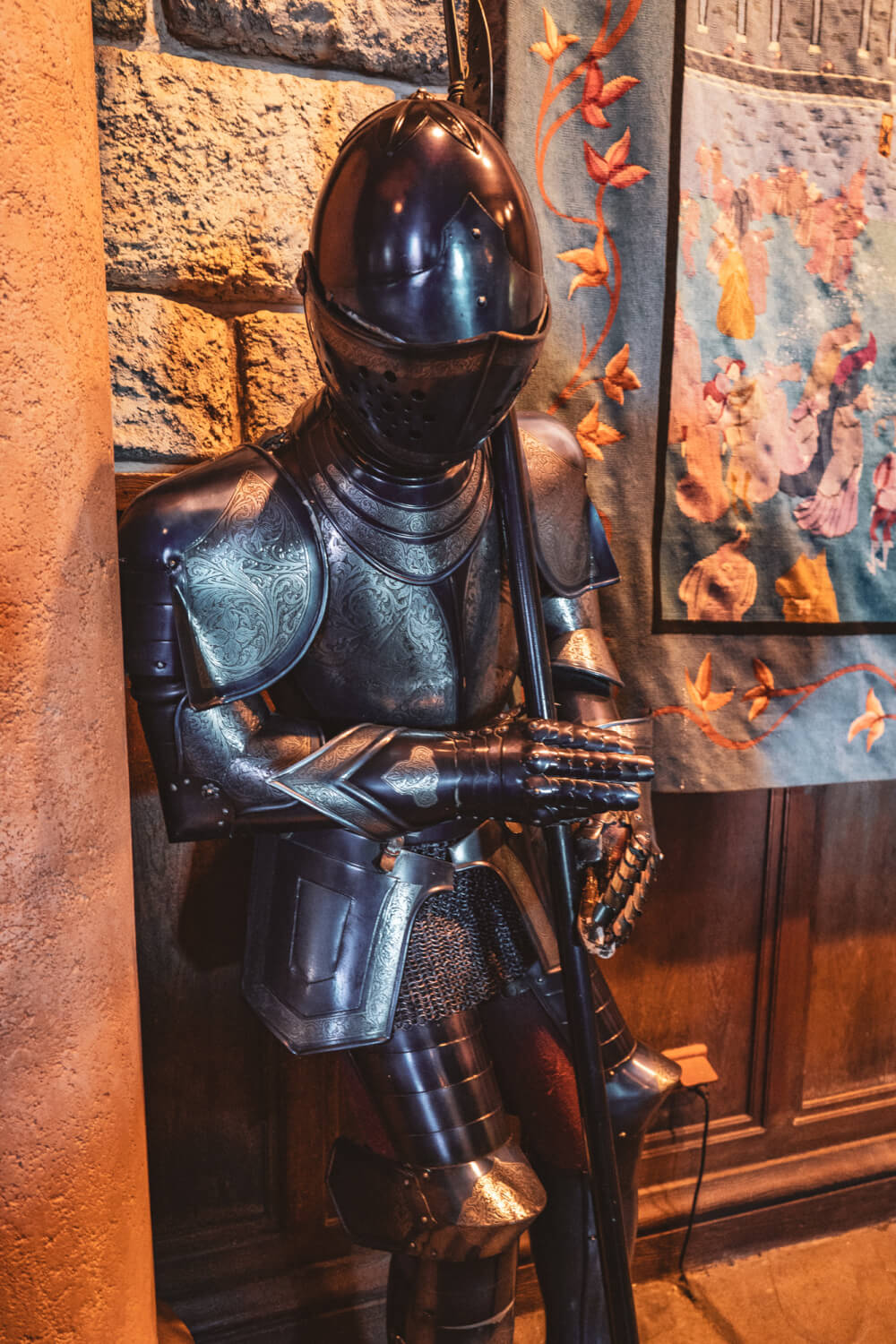 The next time you’re lurking around the Disneyland Paris castle, try taking some photos with flash to see what happens. Apparently when you do flash photography around Maleficent’s raven, its eyes will turn red.

NOTE: I tried it with my phone flash but didn’t notice anything, so maybe try with your camera flash just in case. 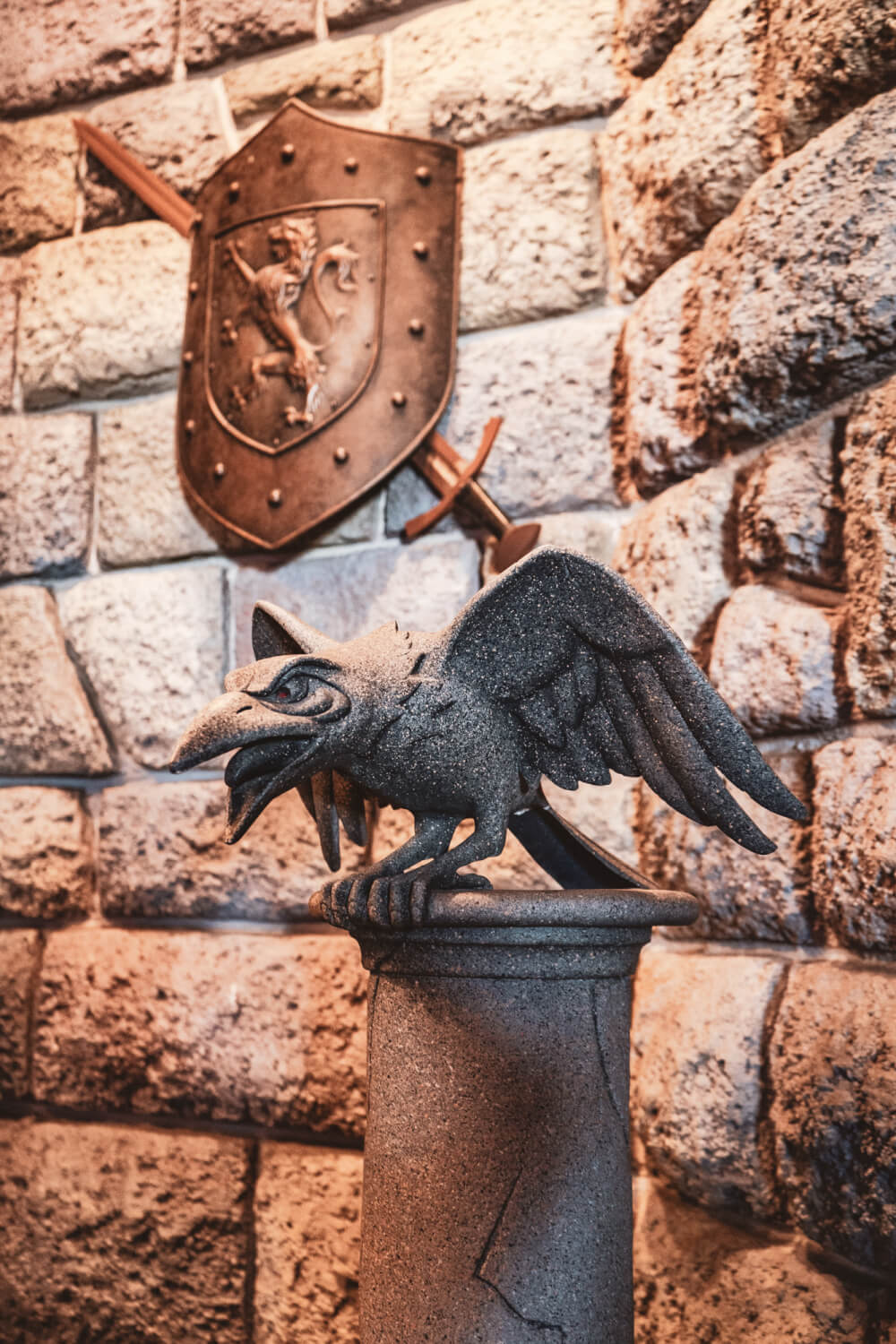 8. Each turret has a unique weather vane

Try to see how many different ones you can spot! 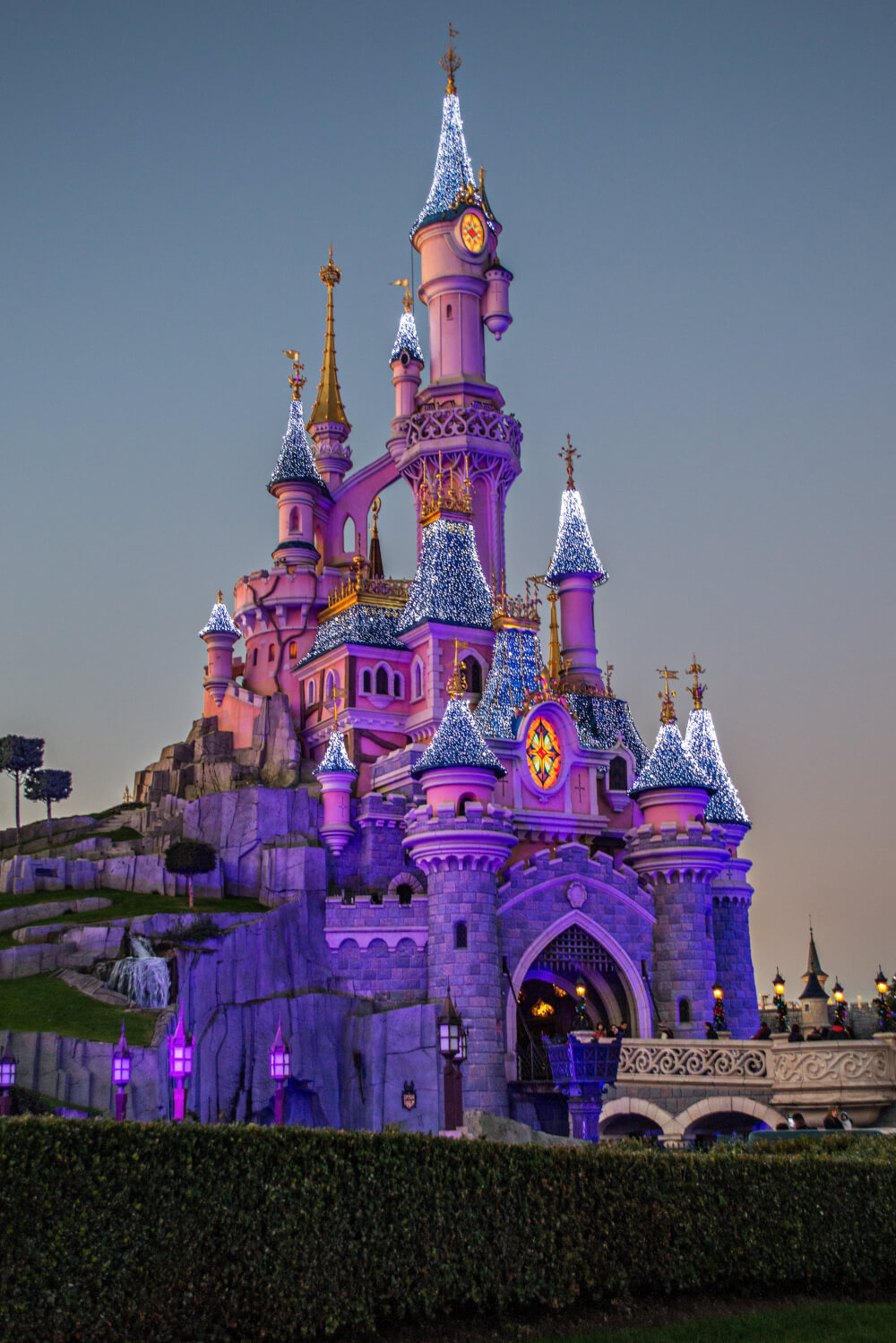 9. Its stained glass windows were overseen by the same guy as Notre Dame

Last but not least, I think this is one of the coolest facts about the Disneyland Paris Castle: Peter Chapman, the man who oversaw the stained glass window work in the castle, has also previously worked on the stained glass restoration work at Notre Dame Cathedral!

BONUS: Can you find the window that has a changing design? Keep an eye out for it! One of the stained glass windows inside the castle has a rosebud that changes into two doves. 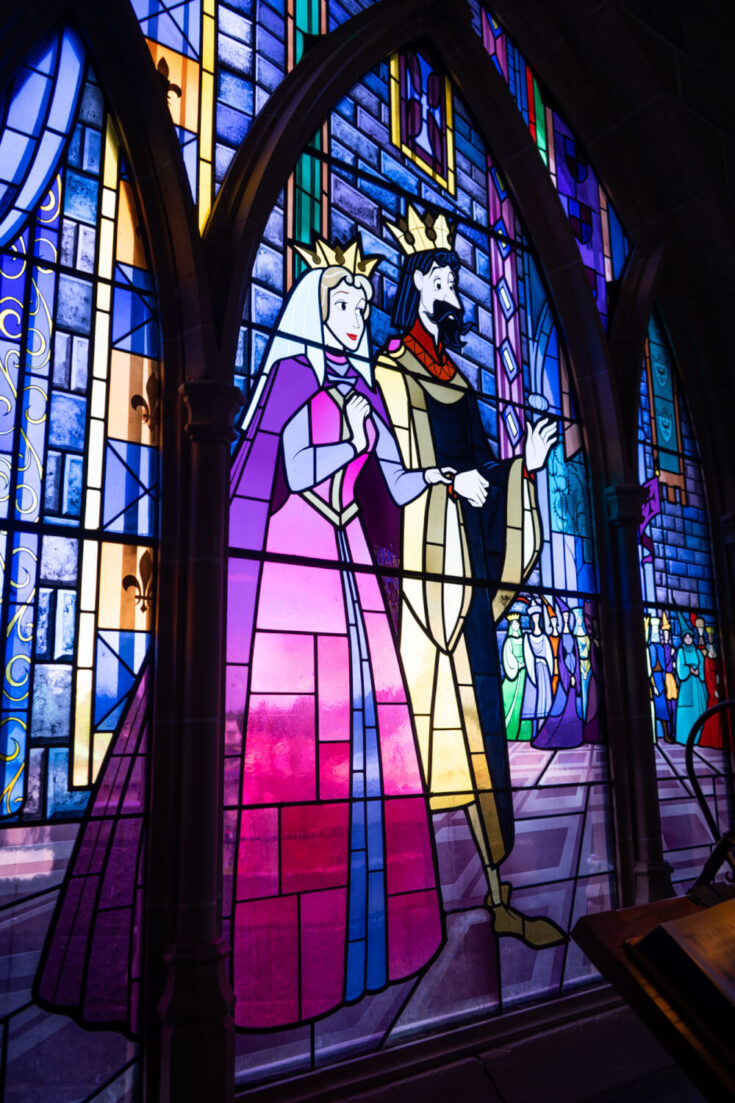 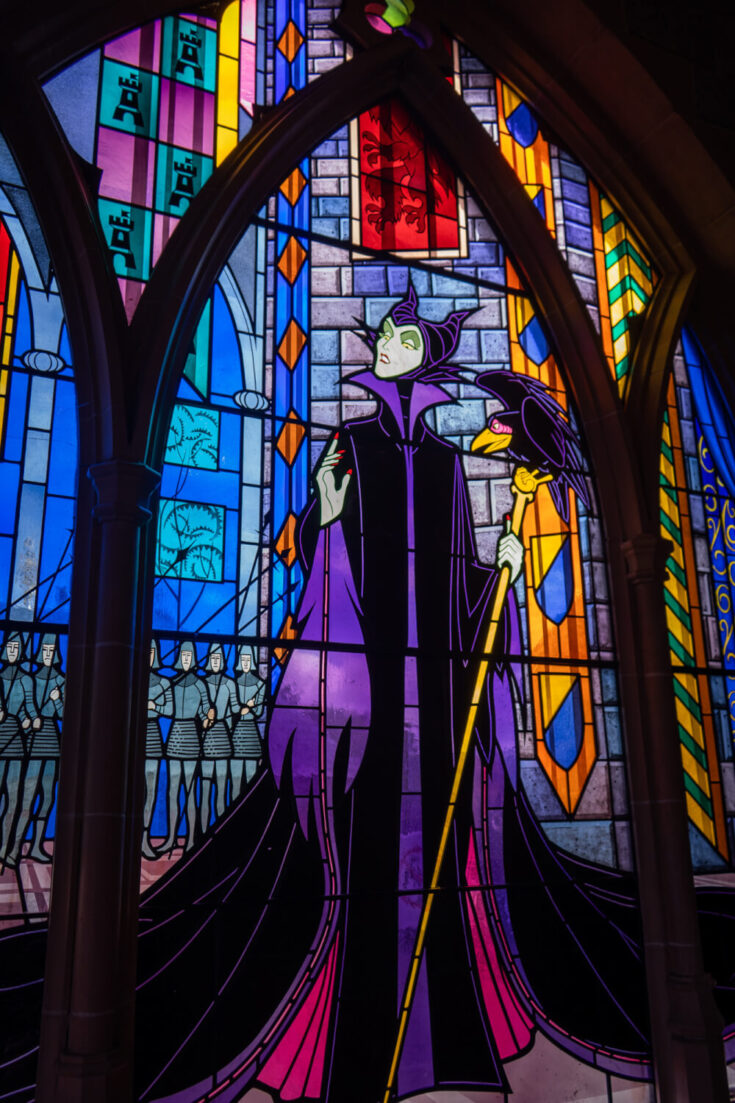 I hope you enjoyed this fun article all about the Disneyland Paris castle! If you want to learn more cool facts/hidden secrets around Disneyland Paris, you can click here for my full guide.