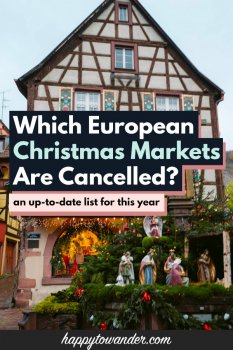 As we switch gears into Christmas mode (early, I know, but I’m convinced I was an elf in another life), one can’t help but wonder what Europe’s Christmas markets will look like this year… and especially whether or not they’ll be cancelled.

For the purpose of this article, I’m mainly discussing the countries in central Europe best known for their Christmas markets (e.g. Germany, Switzerland, France, Austria).

I have also included cancellations across the UK as that info is readily available, whereas details on most other countries are not yet confirmed. I hope you find this all helpful!

Comment with your tips! I’ve tried to assemble all the scattered info I could find/decipher through Google Translate. If however there’s a European Christmas market cancellation you know of that’s missing from the list, please comment below and I’ll be sure to add it!

Those hoping to visit Austria’s scenic Christmas markets this year are in luck – the majority of the big ones appear to be moving forward.

At the moment, planning is already underway for the popular Christmas markets in Vienna, where new safety measures are in the works, including testing stations in popular spots like the City Hall.

The super popular Christmas markets in Salzburg are apparently moving forward, and nearby winter events like the Wolfgangsee Advent are in the works as well.

The one-day market in Hallstatt also appears to be moving forward, as well as the Christmas markets in Graz.

Nonetheless, some smaller markets have announced cancellations already, well in advance of the Advent Season. Here are the Christmas markets in Austria that have been cancelled so far:

Czechia is becoming an increasingly popular Christmas market destination in Europe, thanks in large part to its tourist magnet capital of Prague.

And for eager visitors, the news seems pretty positive. So far, it seems like the Christmas markets in Prague will be going ahead. They’ve even announced the annual competition for their main Xmas market Christmas tree, so at the very least we know there will be festive decorations across the city.

Brno, another city known for Christmas markets in Czechia, has also begun the process of auctioning off stalls to different vendors (here’s a funny article about that), so we can infer that plans are underway there as well.

I will update this section as I learn more about Christmas market cancellations in Czechia.

While Christmas markets are usually a popular staple of the winter season across England, many organizers have already cancelled their winter events for 2020.

Optimistically, it seems like many organizers are cancelling their usual events in favour of alternative programs that allow for appropriate distancing, but the exact details of these are not yet known.

But, if you’re curious, here are the Christmas market cancellations in England we know of so far:

France is home to several world-famous Christmas markets and events. Christmas in Paris for example is a popular choice for many visitors from overseas, however with rising cases and uncertainty, concrete plans on what Christmas will look like across Paris (and France in general) are not yet known.

Christmas markets in the Alsace region are especially popular for visitors from around the world, however official word on the fate of these markets (which include big names like Strasbourg Christmas Market and Colmar Christmas market) is unknown as well.

As of early September, it was announced by the mayor of Strasbourg that the goal was to still hold the city’s Christmas market this year, but with a wary undertone of “anything can change quickly”.

Nonetheless, there are a few Christmas markets in France that have already been cancelled. Here are the ones that have been confirmed so far:

While the situation seemingly changes day by day in Germany, the overall plan right now for most major cities is to proceed with Christmas markets this year, albeit with significant modifications to the market plans/programming to accommodate new hygiene requirements and social distancing. The main exception to this is Cologne’s Christmas markets, where two of the major markets of the city center have already been cancelled.

In Munich for example, while the airport’s annual Christmas market is cancelled, they say that the city’s main Christmas markets will continue this year with modifications, and the story sounds similar for other well-known markets like Düsseldorf and Frankfurt.

For smaller Christmas markets in Germany however, many organizers have decided to cut their losses early. Again, you can access a more thorough list of cancellations here, organized by state, but here they are at a glance…

READ MORE:
Nuremberg Christmas Market Guide: Where to Go, What to Eat & More!

Christmas markets and festivals have become an integral part of the Scottish winter calendar, but one thing’s for sure: the events that do go on will look substantially different this year.

And while official cancellations for Christmas markets and festivals in Scotland are still quite limited, many areas have opted to cancel official switch-on events for Christmas lights this year, including Ayr, Paisley, Inverness, Bridgend and Felixstowe, however most of them will still have the lights, just without the usual switch-on ceremony.

Controversially, the Edinburgh Christmas Market is scheduled to go on this winter.

Here is what we know so far about Christmas markets and festivals that have been cancelled in Scotland:

Switzerland is home to some truly breathtaking Christmas markets (or Swissmas markets, as I like to call them) and so far, it seems most of the major markets are planning to still go on in some capacity, with revised hygiene concepts and programs to reduce crowding.

The mayor of Basel for example has insisted that the famous Basel Christmas Market will take place this year in some form. Plans are also underway for the Christmas markets in Zurich, as well as the lights-on ceremony for ‘Lucy’, Zurich’s beloved Christmas lights.

In Montreux, they have already presented a revised hygiene concept for the beautiful Montreux Christmas Market, and the nearby Bô Noël celebrations in Lausanne are also already planning ways they can host the event with revised safety measures. Overall, it seems like the event organizers in these regions are very opposed to cancelling the Christmas markets completely so (depending on how cases progress of course), we can likely expect them to take place in some way.

Nonetheless, some Swiss Christmas markets have announced that they will not be happening in 2020. Here are the Christmas market cancellations in Switzerland that we know of so far:

While many Christmas events in Wales have already been cancelled, the fate of the country’s major Christmas market in Cardiff is still to be decided.

For now, here is what we know about Christmas market/festival cancellations in Wales for 2020:

I will update this list as I learn more about Christmas market cancellations in Wales, but this page is also a great resource that is getting updated frequently.

Other Major Christmas Markets in Europe: Which are/might be cancelled?

Since Europe covers a ton of countries, there are still plenty of Christmas markets that I haven’t mentioned above.

Unfortunately, the fate of Xmas markets in many other countries is still a huge question mark, but here is what I’ve been able to dig up on some other major Christmas events. Let me know in the comments if you have additional helpful info that I should add!

The Christmas markets in Brussels, Belgium have already set the dates for their 2020 Plaisirs d’Hiver event, (from Nov 27, 2020 to January 3, 2021). However no announcements or updates have been made yet about whether the event will be impacted this year.

The Christmas markets in Budapest, Hungary have been voted one of the most beautiful Christmas markets in Europe for multiple years, and while no official dates have been set for 2020’s markets, the prospects of international visitors coming in are quite bleak, given that they just re-closed the borders in early September due to surging cases in the country.

The Christmas markets in Tallinn, Estonia have also earned international acclaim over the past few years, but as of mid-September, their official pages still list only the market’s 2019 dates. I will update you as I learn more.

Do you have more European Christmas market cancellations I should add to this list?

Let me know in the comments below if I’m missing a Christmas market cancellation that you know of! Pooling all this information from scattered sources has been a huge challenge, and I did try my best but this info changes day by day so I can always use a hand in updating the list! Thanks so much for reading, and I hope you found this helpful.