Pickpockets in Europe are ruthless.

Maybe I’m bitter. After all, you’re chatting with a two time pickpocketing victim here. Not… that… I’m… counting……. 😭

Okay but seriously, if you’re a naive North American like me, one of the biggest shocks when you first arrive in Europe is realizing that there is such thing as professional pickpocketers… as in, people who swindle tourists on the daily and have been doing so for years and years – even relying on it as their sole source of income. The pickpockets in Europe are so good in fact that you’ll often be impressed by their techniques after the shock wears off (and you’ve eaten your weight in stress gelato).

But just because they’re good doesn’t mean you can’t outsmart them 😉 I’ve previously written about the different ways that you can avoid getting pickpocketed in Europe. In this post, I’ll add some extra depth to that by revealing some of the most common European pickpocket techniques and what you can do to make sure they don’t get you. Commit these to memory – I guarantee you’ll come across at least one during your Europe trip.

Have you had any experiences with pickpockets in Europe? Share your stories in the comments so we can all whine together 😉

The Most Common European Pickpocket Techniques

If you’re travelling around Europe, make sure to keep an eye out for the following pickpocketing scams…..

Right off the bat, I need to alert you to “the petition”. In a lot of places, this is like the king of pickpocket techniques.

Volunteers (usually women) will approach you with a clipboard and a pen, asking you to sign a petition for some kind of cause. These women typically work in groups, and one often comes to pickpocket you when you’re distracted by this petition. Another variation of this scam is that the petition will outright ask you for a donation amount, and they’ll hound you until you donate.

HOW TO AVOID THIS PICKPOCKETING SCAM: A firm ‘no thank you’, coupled with walking away and breaking eye contact is usually enough to thwart this.

Again, working in groups, you’ll be approached by a woman who asks you to take a photo for her. When you agree and grab her camera or phone, often there’s another distraction that comes into play (e.g. a child running into the scene) and while you’re distracted, a partner of hers will come take your wallet. This almost happened to me in Bratislava, but I noticed and swatted the woman’s hand away as she was fist-deep in my bag.

Yes, it was awkward.

HOW TO AVOID THIS PICKPOCKETING SCAM: Simply refuse to take the photo, or if you want to be nice (and aren’t sure if it’s a scam or not), make sure you have your bag in front of you/in plain sight before you snap the shot. Pickpockets in Europe often work in groups, so be wary of that.

READ MORE:
How to Avoid Crowds in Dubrovnik

I’ve heard about this happening a lot in Barcelona. Essentially, you’ll be approached by “police officers” who demand to see your IDs, passports and wallets. Once you’ve passed everything along, they’ll stealthily swipe away your cash. Often this scam targets partyers who are going home after a night out, so be wary of this on your next boozey escapade.

HOW TO AVOID THIS PICKPOCKETING SCAM: Be wary of “police officers” randomly asking you to see ID. This is a very rare occurrence and unless there’s a reason for police to approach you (you’re doing something wrong or in somewhere you shouldn’t be), then odds are, legitimate police won’t come up to you asking for ID. If they do, resist handing over your stuff right away. Ask more questions about why they need it, ask to see a badge, etc. Odds are, if you make it tough for them, they won’t continue to pursue you. 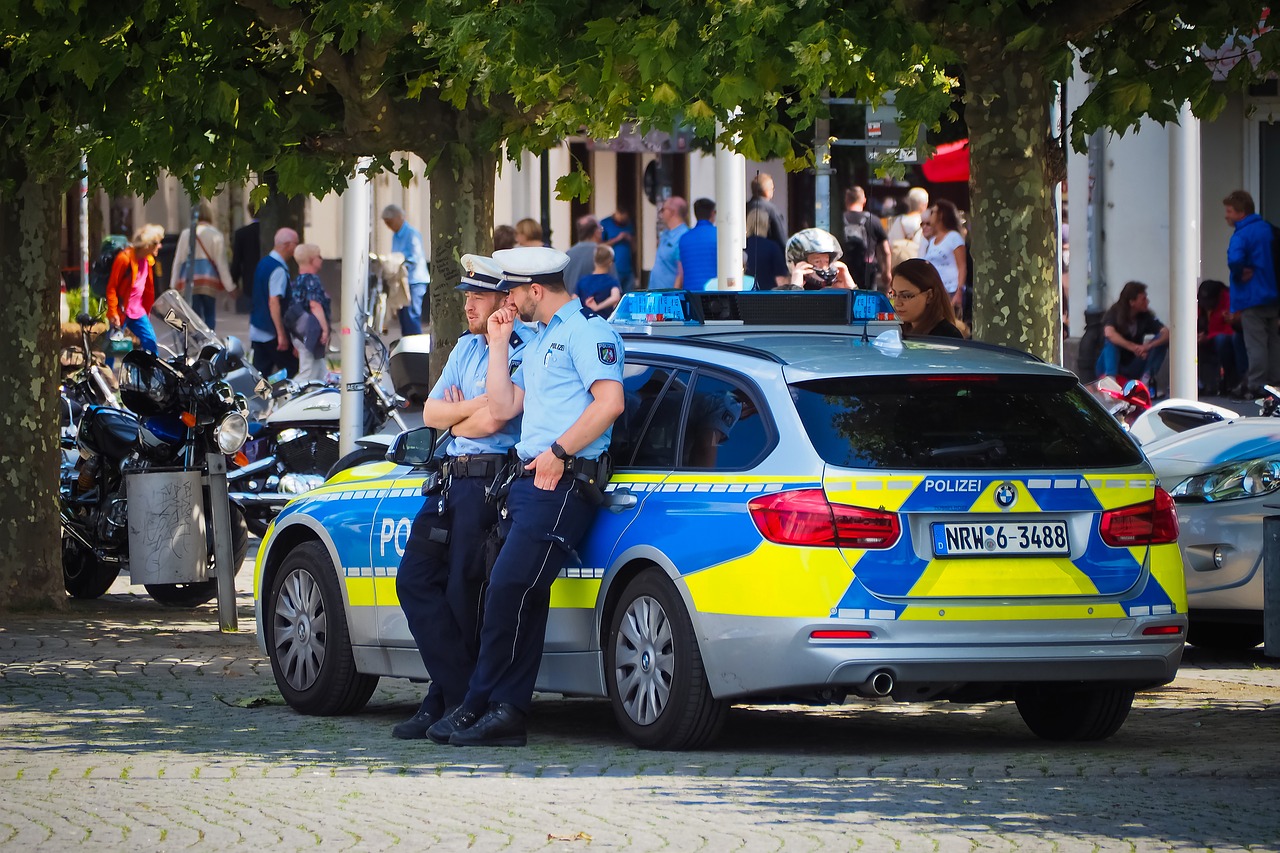 Photo of totally legitimate police to help you out 😉 haha

Shoving and pushing is frequently used as a form of distraction, especially in crowded spaces like a bus, train or in a touristy spot.

HOW TO AVOID THIS PICKPOCKETING SCAM: When you find yourself in a crowded space, make sure you have your backpack/purse in front of you, in plain sight. Also ensure that you have your hands over any pockets that might contain valuables.

This happened to a friend of mine in Nice, while going up some stairs to the city’s most well-known viewpoint. This one is extremely frustrating because you’ll know pretty much right away what they’re up to, but it’s tough to avoid since you’re outnumbered. Essentially, with the Group Ambush, you’ll be confronted with a big group of (usually) teenagers who surround you and sort of block your way while you walk. At this point, grubby hands will move around to snatch whatever valuables you have on you.

READ MORE:
The Ultimate Guide to London on a Budget

HOW TO AVOID THIS PICKPOCKETING SCAM: Have a hand over your belongings at all times, or make sure they’re locked up. Any time you’re surrounded by a large number of people, this is a smart practice anyway.

Imagine this, you’re strolling through the scenic streets of Rome, Madrid or some other gorgeous city, when all of a sudden you feel it: the drizzle of bird poop on your shoulder, followed by some good Samaritans who have swooped in to let you know it happened and are on-hand with napkins and other goodies to help you clean up. Before you know it, your new friends have told you where the nearest washroom is and sent you off on your merry way….. except maybe a lot lighter in cash 😉

This is one of the oldest tricks in the book, and while I haven’t encountered it myself, I’ve read so many reports of it in big cities. Basically the pickpockets will walk around with a little paint that they squirt on unsuspecting tourists, and then they help you clean it up (while stealthily taking your wallet and valuables off your hands).

HOW TO AVOID THIS PICKPOCKETING SCAM: Instead of being distracted, have a hand on your valuables right away and refuse their help. Try to maintain as much space as possible between you and the “helpers”.

This one happens frequently in tourist-heavy areas like attractions, museums, etc. While not so much “pickpocketing” as it is straight-up theft, I wanted to remind you that this technique exists. Basically, in this scam, you’ll be in a public washroom of some kind where there are stalls with gaps at the bottom (as is common in this part of the world). As you place your bag down to do your business, a hand reaches over and steals your bag, running and getting out of there before you even get a chance to chase them down.

READ MORE:
Chasing Sunrise at Lake Bled: Getting the Best Views with the Ojstrica Hike

HOW TO AVOID THIS PICKPOCKETING SCAM: Don’t put your bag down on the ground near the gaps below stalls. Instead, hang it up on an available hook, or put it at your feet where grubby hands can’t get to them.

So, hopefully you found that guide on common pickpocketing techniques helpful. Do you have any common techniques or scams that I’ve missed? Let me know in the comments!